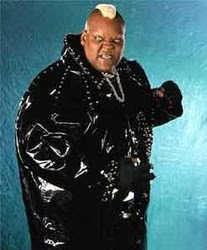 By Kevin Hunsperger
@kevinhunsperger & @my123cents on Twitter
Listen to the podcast
Follow my blog with Bloglovin
When Men on Mission arrived on the scene in WWF in 1993, I never imagined he would become a dark and demonic figure. As Mabel, the 500 pounder danced his way to the ring with his partner Mo and their rapping manager Oscar. Then the duo turned heel and dumped Oscar. Eventually, Mabel became a king but later his persona took on a more evil look.
As Viscera, he wore all black to the ring and changed the color of his eyes to white. He was part of the Ministry of Darkness, joining forces with Undertaker, Paul Bearer, Acolytes, and more. Viscera used his size and power to take control of his opponents.
Viscera then became Big Daddy V, a playboy of sorts. But there was still a mean streak there. I can't remember what happened first, the run with Lillian Garcia or his time being managed by Matt Striker. None-the-less though, Viscera was a fear-inducing monster on WWE programming for many years. May he rest in peace.
Posted by Kevin Hunsperger at 4:14 PM