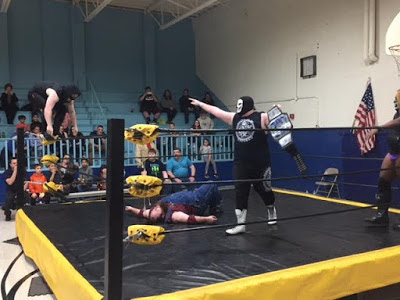 By Kevin Hunsperger
@kevinhunsperger & @my123cents on Twitter
Listen to the podcast
Follow my blog with Bloglovin
It's day 10 of the countdown and another member of the Stride Pro Wrestling roster to talk about, Wraith. He appeared in January 2018 decked out in black and a mask covering his face. He entered the ring in darkness and made quick work of his opponent, eventually carrying the young man's lifeless body from the ring.
Wraith quickly became established as one of the top wrestlers on the Stride roster, winning both the Stride Cup and the Legacy Championship in one night. His ghoulish behavior continued as he recruited other disciples to join his path of destruction, most notably Ryzer. Wraith dominated most of the year before eventually fading away in 2019.
The word wraith means a ghost or ghostlike image of someone, especially one seen shortly before or after their death.  Who says wrestling doesn't teach you anything...
Posted by Kevin Hunsperger at 9:40 AM