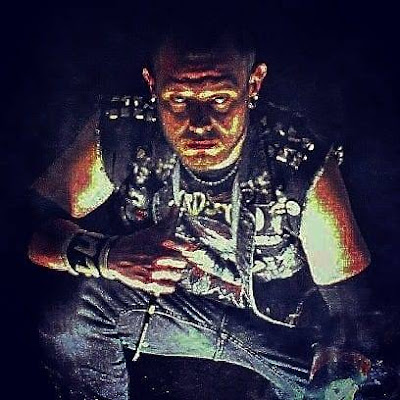 By Kevin Hunsperger
@kevinhunsperger & @my123cents on Twitter
Listen to the podcast
Follow my blog with Bloglovin
What can I say about Cash Borden? First, the disclaimer, he's a friend of mine in Stride Pro Wrestling. Cash isn't the biggest guy in the fight, but he is definitely the most fearless. The things I've seen him do have been pretty incredible. He's scary because he doesn't care what he does to his opponents or HIMSELF. He inflicts just as much pain on himself when he's in the ring.
He went toe-to-toe with Roger Matheus (a previous entry for this blog). Cash even came to the ring when Roger and I battled inside a steel cage and helped me get the win. He had some help from his trusty taser. And that's the other thing about Cash; he's not afraid to grab an object or two to get the upper hand. Barbed wire bats, tasers, and light tubes are just a few of his weapons of choice.
Cash continues to carve a niche for himself here in southern Illinois and southeast Missouri as one of the all-time greats. I appreciate what he brings to the ring each time he gets in there for a fight. He and others are also working to establish Anna Fight Underground on the local indy scene. Give them a look as well.
Posted by Kevin Hunsperger at 7:03 PM