Scariest of All-Time: The Brood 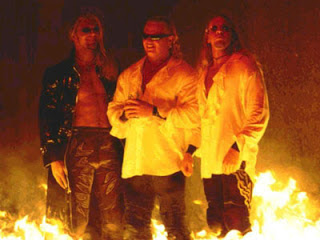 By Kevin Hunsperger
@kevinhunsperger & @my123cents on Twitter
Listen to the podcast
Follow my blog with Bloglovin
When it comes to impressive ring entrances, it's hard to argue that the Brood isn't among the best. I loved the music and the rising from the arena floor. Gangrel, Edge, and Christian were portrayed as three vampires ready to take a bite out of the WWF.
They did too. Adding to the scariness of the gimmick, Gangrel would drink from a goblet of blood. While I thought he played the role very well, I never really bought into Edge and Christian as vampires. I think maybe they were supposed to be more goth than vamps.  I don't know the exact etiquette here.  But obviously, the two of them evolved through the years, and each became world champion.
The Brood also ended up joining forces with the Undertaker and his Ministry of Darkness. Gangrel would separate from Edge and Christian and teamed briefly with Viscera.  But he never enjoyed the same success his Brood brethren did in WWE, but he's still active to this day. And let's not even bring up the New Brood...
Posted by Kevin Hunsperger at 12:25 PM