Once again, I made my way to Cape Comic Con in Cape Girardeau, Missouri. But this year was different. I wasn't just there as a fan. The other hosts on the Jittery Monkey Podcasting Network had a table at this year's con.

We connected with many people, some who already listen and others we hope will start tuning in. If you stopped by the table, we appreciate it. Let us know what you want to hear on the Jittery Monkey Podcasting Network.

Something else as part of the weekend, Cape Championship Wrestling. Chad Smart (Positive Cynicism) and I attended the show along with Greg Mehochko (Nerds United, 5 Heart Podcast) and Mike Luther (Nerds United Co-Host of the Year).

Listen to the My 1-2-3 Cents recap of the weekend right here.
Posted by Kevin Hunsperger at 10:16 AM No comments:

This week on Go Figure Friday I take a closer look at WCW Toy Biz's thumb wrestlers. This line came out in 1999 and the set I have is Hulk Hogan and "Macho Man" Randy Savage. Both are wearing nWo gear.

Take a look at the video and let me know what else you'd like to see in the series.

Posted by Kevin Hunsperger at 11:54 AM 5 comments:

May 4 is around the corner and Stride Pro Wrestling is celebrating with a big show in Carterville. As a preview, I sat down with the biggest Star Wars fan I know, Heath Hatton. He's not only a big Star Wars guru but a champ in the ring too. You can listen here.

Please rate and review the podcast on your favorite listening app. Take a screenshot of the review and share it on social media (tag me in it @kevinhunsperger or @my123cents on Twitter) and you could win a prize!


Posted by Kevin Hunsperger at 1:17 PM No comments: 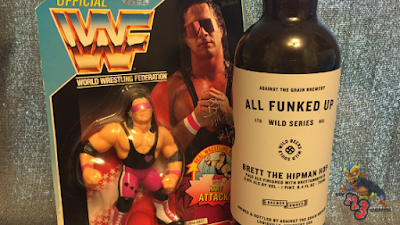 Bret Hart is an icon. He's one of the all-time greats. Now he has a craft beer loosely based on him. Brett the Hipman Hop is made by Against the Grain Brewery and Smokehouse in Louisville, Kentucky. The company recently sent me a bottle to sample for the podcast.

And that's just what I did with former Stride Pro Wrestling champion Roger Matheus. We drink the beer and share memories of the Hitman in the process. Check it out here.

Posted by Kevin Hunsperger at 6:37 AM 2 comments:


Posted by Kevin Hunsperger at 5:38 AM 5 comments:

This week, Stride Pro Wrestling manager J. Wellington Beauregard is my guest co-host. We discuss our favorite managers over the years. Who is on your list? Listen HERE.

Be sure to tune in to the My 1-2-3 Cents Facebook page for a live recap of WrestleMania 35 and Raw on Tuesday afternoon.

Posted by Kevin Hunsperger at 8:19 AM No comments: 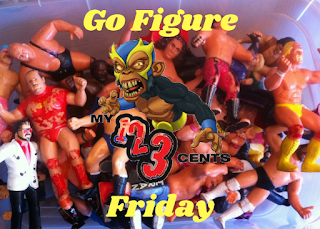 It's WrestleMania Week. I'm celebrating the Hall of Fame newcomer Billy Gunn this week. I met Billy in 2005 and got to interview him for the news. While he was here, I asked for his autograph on an action figure that is still in the package.

Posted by Kevin Hunsperger at 5:25 AM No comments: 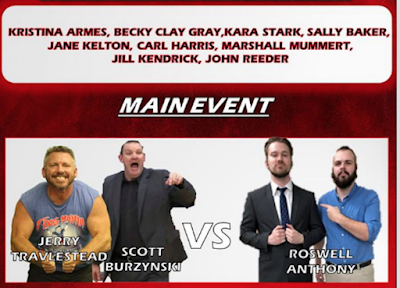 One thing I love about Stride Pro Wrestling is being able to be a part of the community and help others in need. That's been the case countless times as the men and women who work in the ring and behind the scenes at Stride have helped raise tens of thousands of dollars since 2016. We have done benefit shows for storm victims, cancer patients and schools. Lots and lots of schools.

This Saturday night we take the show to Johnston City High School. A handful of educators will step through the ropes that night to put their bodies on the line to help the children in their district. But these teachers and school employees aren't just going in blindly. They've been going through some intense training at the Stride Pro Wrestling school.

It's become a hallmark of Stride fundraisers. It gets the crowd pumped up to see their favorite teacher or community member get in the ring and mix it up with some of the best on the Stride Pro Wrestling roster. I'm excited to see what happens this Saturday night as ten staff members in the Johnston City school district will rumble. In addition to the teachers clashing, you'll be able to catch your favorites in action too. 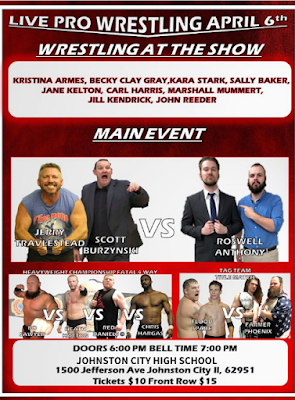 So come on out Saturday night to Johnston City High School. Bell time is 7 p.m. The championship is on the line in a fatal four-way match and the tag team titles will also be decided that night. Plus you'll get to see Dexter Roswell and Mr. Anthony get their mouths shut. See you there! 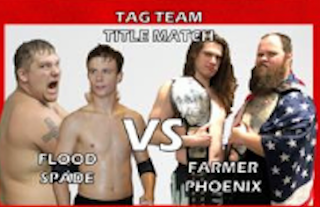 Last year at this time, Jay Spade and Tony Flood were embroiled in a classic feud for the Stride Pro Wrestling Heavyweight title. Now, the two are allies and partners and will have a shot at the tag team championships this Saturday night. Say what?!?

I've yet to hear an exact explanation from Spade, who has been a fan favorite since I first met him in 2011. Somewhere along the way, something changed. For the past few months, he'd been living a double life. Not only was he fighting intense battles with Cash Borden and getting cheered by the crowd, but he was also disguising himself in a pair of coveralls and a mask and wielding a lead pipe. He whacked Heath Hatton more than once with it.

Hatton and Flood had been battling for the heavyweight title when Spade's interference started. When he was eventually unmasked, Hatton, along with the fans were shocked. Even more shocking now, Spade and Flood will relive their rookie year and work together as a tag team.

This duo has been granted a championship match in their first outing. I have no doubt they'll do whatever it takes to beat Farmer Billy Hills and Scott Phoenix. However, I know the champs. They just regained the gold and will fight tooth and nail to keep those belts.

It's going to be a great battle. Come see the action Saturday (April 6) at Johnston City High School. Bell time is  7 p.m.

Posted by Kevin Hunsperger at 4:09 PM No comments:

The Stride Pro Wrestling Heavyweight Title has been held by six different men over the past three years. The current champion, Red Daniels will put the belt on the line against three other Stride competitors, including one man who has never had a championship match.

"Warbound" Bo Sawyer feels he was slighted after being attacked by his former partner, Jason Tiller at Strideiversary. He was set to compete in the finals of the Legacy Cup, with the winner being granted a contract for a championship match. Sawyer was replaced by Daniels who went on to beat "The King" Chris Hargas and later capture the title from Heath Hatton. Sawyer, by the way, has held the Stride Pro Wrestling tag team titles twice with Tiller.

The King is also in this fatal four-way match. He has never held the Stride title but is the former Legacy Champion and current self-professed King. Hargas never technically lost the Legacy belt, he had to surrender it though due to a back injury. Since returning from that, he's wrestled a bit more aggressive and has added manager J. Wellington Beauregard to his corner.

Hatton is a former three-time heavyweight champion. He and Ax Allwardt have also been the tag team champions twice and he had a run as Legacy Champion. His third reign lasted just seconds as Daniels cashed in after Hatton outlasted Tony Flood in a 60-minute Iron Man Match last month. 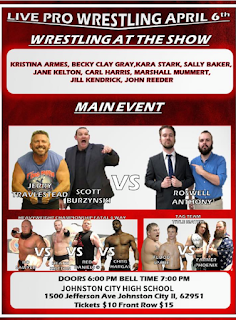 It's easy to see why all four men have a vested interest in this match. Find out who comes out on top this Saturday night (April 6) at Johnston City High School.

Posted by Kevin Hunsperger at 5:54 AM No comments:

WrestleMania is six days away. In the final podcast of my WrestleMania series, my guest co-host Chad Smart (from Positive Cynicism) speak about our favorite openings matches for the big event.

Admittedly these are not the BEST matches, but instead our favorites. Chad ties all of his to the upcoming WrestleMania 35. I went with ones that were nostalgic for me. What are your favorite opening contests from WrestleMania? Let us know over on the My 1-2-3 Cents Facebook page.

You can listen to the show here. And be sure to check out the Jittery Monkey store as well as the upcoming sale on Pro Wrestling Tees. 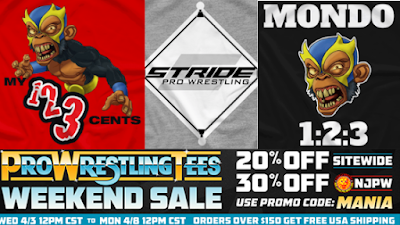 Posted by Kevin Hunsperger at 5:09 AM No comments: