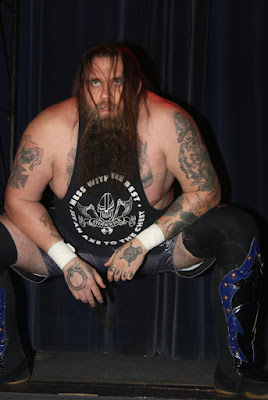 By Kevin Hunsperger
@kevinhunsperger & @my123cents on Twitter
Listen to the podcast
Follow my blog with Bloglovin
Today's post is a shout-out to a fellow member of the Stride Pro Wrestling roster, Roger Matheus. I still remember the first time I saw Roger at a show. He was head and shoulders above the rest of the roster tipping the scales at nearly 300 pounds.  I learned of his days in both the military and the world of mixed martial arts.
The Viking King then stepped through the ropes. He dominated and decimated his opponents like no other before eventually beating popular champion Heath Hatton for Stride's most coveted prize. After he lost the title to Jay Spade in a 'last man standing' match, he took his aggressions out on referee Lane Austin and eventually me and my then 12-year-old daughter. 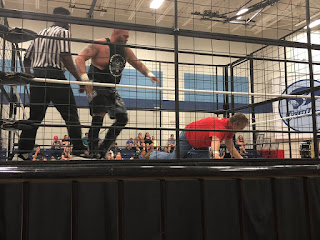 This all lead to a cage match between us and this is where the fear factor reached a fever pitch for me. I'll never forget the way I felt standing in the middle of that ring surrounded by the steel cage and hearing his music startup. It was dark inside that gymnasium as fog filled the entrance ramp and Matheus emerged through the curtain.
I got a chill down my spine and really began second-guessing my decision to step into the ring against this monster. As he made his way through the cage door I tried to make a quick exit over the top before being caught. It was like a lion catching an old, out of shape gazelle. I was bounced around the ring like a pinball.
That was two-and-a-half years ago and Matheus remains the most intimidating and fear-inducing wrestler of the roster. I always respected Roger, but that respect has reached a new level the more I get to know him.
Posted by Kevin Hunsperger at 12:50 PM