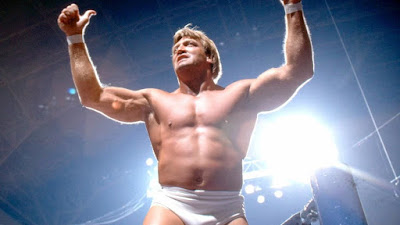 By Kevin Hunsperger @kevinhunsperger & @my123cents on Twitter Listen to the podcast  Follow my blog with Bloglovin
Sometimes being good is bad for a wrestler's character. It's like trying to fit a square peg in a round hole. Such is the case with 'Mr. Wonderful' Paul Orndorff.
The build-up to the first WrestleMania in 1985 involved the trio of Orndorff, 'Rowdy' Roddy Piper, and 'Cowboy' Bob Orton. These three were perhaps the most hated men in the WWF. They picked on pop star Cyndi Lauper, Dick Clark, Capt. Lou Albano and many other good guys and celebrities were involved in the infamous Rock 'n Wrestling Connection.
When it finally came to a head at the War to Settle the Score, and Mr. T stepped up to help Hulk Hogan, the main event was set for the upcoming WrestleMania show. Piper and Orndorff would team up to battle the Hulkster and Mr. T.
We all know that Orton hit Orndorff with his cast during the match, and Hogan scored the victory for his team. I was 12 years old then, and the idea of a babyface, Mr. Wonderful, was, in fact, wonderful news to me. I loved that he and Hogan were teaming up and taking on the likes of Piper, Orton, Adrian Adonis, and the other villains that terrorized the WWF good guys. 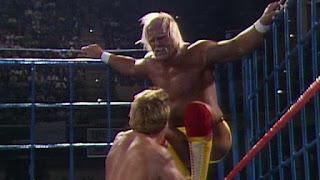 But in the summer of 1986, Orndorff had had enough of being a good guy and, in dramatic fashion, attacked Hogan during a tag team match with King Kong Bundy and 'Big' John Studd, members of the Heenan Family. This led to a reconciliation with Bobby Heenan, and Orndorff embarked on a fantastic feud for the rest of 86 and into 1987 against Hogan. At that point, he came closer than any other Superstar to winning the WWF Championship during that classic cage match on Saturday Night's Main Event.
By this point, I was siding with Orndorff in his battles with Hogan. Perhaps I had grown tired of Hulkamania too, but it wouldn't be long before I'd embrace it again.
My point to all of this is that I did love the good guy 'Mr. Wonderful', but I don't think it fits with his persona. So turning bad again the following year made him even better. In hindsight, I liked Orndorff more during his second heel run. Eventually, the most hated guy in the company, Piper, turned good. This all worked on many levels and was a win-win for the fans.
For some reason, in 1987, they did the face turn again. By this point, Orndorff was nearing the end of his tenure with the WWF and would be gone by the end of that year. He popped back up in WCW years later, where he remained a bad guy throughout his in-ring tenure.
Being that cocky and calling himself 'Mr. Wonderful' is what being a fantastic bad guy is all about. He was next level during that 1986 run. I miss that era and Paul Orndorff.
Posted by Kevin Hunsperger at 7:16 PM 6 comments: Greetings on what is the 12th anniversary of the My 1-2-3 Cents brand. Over the past year, I've neglected my blogging duties, with the last post on this page happening in October 2021.

What can I say, other than life happens, and sometimes the things we deem so important fall by the wayside? The My 1-2-3 Cents brand though has not been neglected. I drop a new podcast each Monday morning (at midnight CST). The YouTube channel still gets some love from time to time, but my passion for writing has waned for some reason.
Part of that can be attributed to the fact that I am creating new content daily on the job and working on the other aspects of the My 1-2-3 Cents brand. I burned myself out a few years ago when I embarked on a blogging streak. I did the same thing with my run streak of 1,004 consecutive days of running. The blog streak reached 897 days.
Now, I'm back. At least in my mind, I am. I will use this platform to cover topics I don't get to on the podcast, YouTube, or my TikTok. I do try to keep wrestling themes going there as well. Check me out, @kevin_hunsperger.
What're Your 1-2-3 Cents? Do you still read blogs? I appreciate your support through the past dozen years and look forward to continuing to evolve and provide different types of wrestling-related content.
Posted by Kevin Hunsperger at 12:00 AM 7 comments: