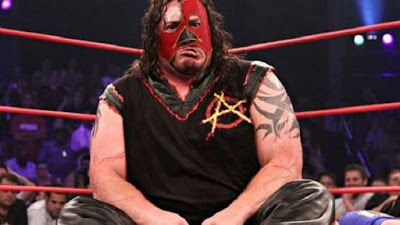 By Kevin Hunsperger
@kevinhunsperger & @my123cents on Twitter
Listen to the podcast
Follow my blog with Bloglovin
Admittedly, I don't know much about the career of Abyss before he arrives in TNA. But when he arrived on the scene, we learned quickly he was a dangerous man who needed to be taken seriously. Some compared his look to the love-child of Kane and Mankind. I'd say that's a pretty fair comparison.
Like those two Superstars, Abyss was a tough competitor, putting himself and his opponents through hell in the ring. He's been in there against many greats, including Kurt Angle, AJ Styles, and Christian Cage. Abyss had a reputation as a hardcore guy but proved himself time and time again. His loyalty and longevity with Impact earned him a spot in the company's Hall of Fame.
In recent years, Abyss has traveled to our neck of the woods in southern Illinois and southeast Missouri to wrestle in Monster's Ball matches. Those encounters involved a variety of weapons. It was at a show for Stride in August 2018 that I met the monster in person. Despite his exterior, the man behind the Abyss character is quite nice. In fact, he gave me some tips for my audition with Impact a month later.
Now he's an agent with WWE and is occasionally on-screen as Joseph Park. While we'll likely never see him as Abyss in a WWE ring, it's nice to see a man who gave so much to the business get a bit of the bigger spotlight.
Posted by Kevin Hunsperger at 8:36 PM