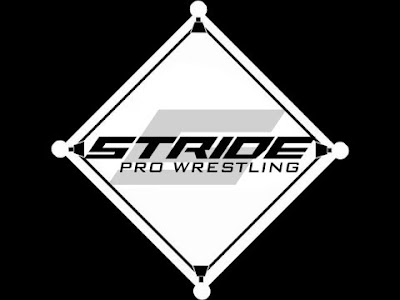 Five years ago this month, Stride Pro Wrestling was born. Well, the idea for Stride is a little older than that, but the very first live event for Stride was held on March 5, 2016, in front of a packed crowd at the Illinois Star Centre Mall. In those early days, it was known as CMA Pro Wrestling but shortly changed to Stride.  I've blogged, YouTubed, and podcasted a lot about Stride over the past five years. This post will be no different than those previous ones. 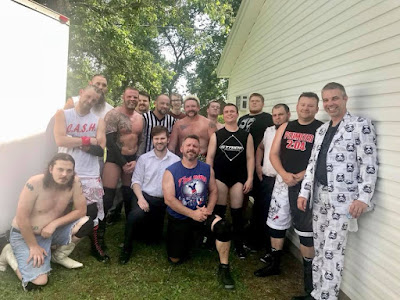 I'm extremely proud of what Stride Pro Wrestling has accomplished over the past half-decade. Now that the recent 'Strideiversary' show is behind us, the company has held 83 (I think that's right) shows. I've been there for most of them, missing a handful due to other commitments. No matter the location, I've always had a blast, whether at the mall, our current location in Carterville, or on the road in places like Pinckneyville, West Frankfort, or Rent One Park in Marion.

Stride isn't just about doing a wrestling show. Over the past five years, Stride fundraisers have netted more than $100,000 for various causes. Whether it's an event to help someone with their medical bills, a school fundraiser, or a sports team, Stride has been there. Add to that the toys we've collected over the past three years for the My 1-2-3 Cents/Stride Pro Wrestling Figure Drive, and it's safe to say we're making a positive impression in southern Illinois. 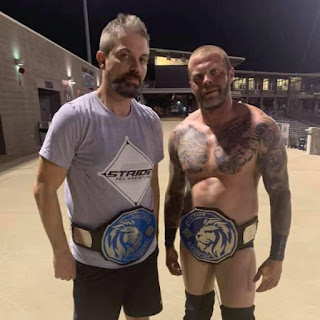 I want to thank Tyler Hatton, the man behind this company's creation, for allowing me to be the ring announcer for Stride Pro Wrestling over the past five years. Not only have I had a chance to ring announce more than once, but I've also been able to get into the ring and wrestle. Facing Roger Matheus in Stride Goes Steel's main event in Pinckneyville was amazing, but winning the tag team titles with Tyler is something I never, ever dreamed would happen.

I'm so looking forward to what 2021 has to hold for Stride. It's been a struggle over the past year, but I believe we will be back in front of large crowds and raising money for non-profit groups in our area sooner rather than later. Thank you to everyone who has bought a ticket or a t-shirt to support our mission. (Speaking of shirts, get yours here on Pro Wrestling Tees.) And if you'd like to train to wrestle with Stride Pro Wrestling, contact us on our Facebook page.