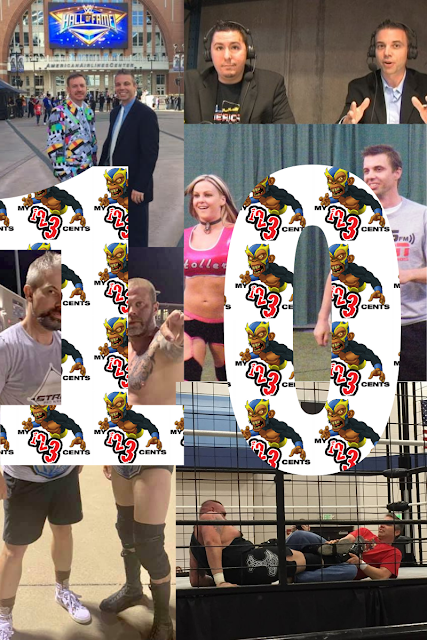 By Kevin Hunsperger
@kevinhunsperger & @my123cents on Twitter
Listen to the podcast
Follow my blog with Bloglovin
It's hard to believe, at least for me, but 10 years ago today, the My 1-2-3 Cents brand was officially born. You can take a look at that first blog right here if you're interested. I remember sitting down at my computer on a Friday night and getting started. I had written blogs before but it was the encouragement of my friend and mentor Jeff Rose that pushed me to create a wrestling-themed blog.
So much has changed over the past decade. In December of that year, I added a YouTube channel. The spring of 2011 saw the creation of the My 1-2-3 Cents Facebook page. Then in December 2014, the podcast was created on the Jittery Monkey Podcasting Network, and with it came Mondo the Monkey.
Not only did the brand grow, but so did my fandom. Chad Smart and I ended up attending seven more WrestleManias after going in 2006 and 2008 long before this was even a thought. I got involved in indy wrestling, first serving as a commentator for All-American Pro Wrestling in spring 2011 and eventually stepping into the ring and having my first match.
It's been an awesome decade. Here's a look back at a few of the bigger moments and memories for me as a fan and a performer. Thank you all for the support.
Nov. 6, 2010 - refereed for the first time for USCW.
June 10, 2011 - 'managed' Velvet Sky at a Basebrawl event for TNA Wrestling.
July 30, 2011 - did live commentary for the first time for AAPW.
Jan. 14, 2012 - beat Mike Masters in my first match.
March 12, 2016 - debuted as ring announcer for Stride Pro Wrestling.
May 19, 2018 - beat Roger Matheus inside a steel cage.
Nov. 10, 2018 - tried out for a ring announcing gig with Impact Wrestling. I didn't get selected...
Aug. 3, 2019 - joined a tag team match with Heath Hatton against Tony Flood and Jay Spade. We won by disqualification.
Aug. 29, 2019 - teamed with Hatton to beat Flood and Spade for the Stride Pro Wrestling tag team titles. Yes, that is a real sentence.
Sept. 7, 2019 - retained the tag team titles against Flood & Spade.
Sept. 14, 2019 - retained the tag team titles in a triple-threat match against Roger Matheus and Chris Hargas (Kings of Destiny) and Bud Gallows and the Masked Assassin.
Oct. 12, 2019 - wrestled in my first battle royal and was eliminated by Ragin' Redneck. Later that night Hatton and I lost the tag team titles to the Kings of Destiny.
Dec. 7, 2019 - teamed with Spade and Hatton to beat the KOD and Savveon Ayres.
Again, I thank you and if you'd like to support My 1-2-3 Cents or Stride Pro Wrestling please head to my store on Pro Wrestling Tees. Click here.
Posted by Kevin Hunsperger at 7:07 AM 22 comments: 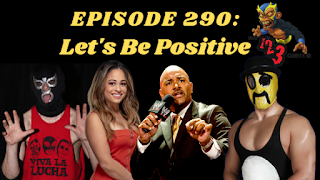 Full disclosure for this week’s show. I had two different guests lined up but unfortunately, things fell through at the last minute with each.  So that means I had to call an audible and do something I had planned for later in the month while I’m on vacation.

Almost one year ago, I made a career change and left the world of broadcast news after 22 years. I’ve already done a show with some clips of wrestling interviews I conducted as a news anchor. Today, in an effort to spread some positivity, I’m sharing the Cameo videos my friends sent me after I made the career change.

Instead of hearing me talk about a random topic for 30 or more minutes, I decided to go this route. It’s an ego boost for me for sure. But it’s also positive content to insert into a world that right now is filled with hate and negativity.

Check out the Pro Wrestling Tees store too. And shop COLLARxELBOW with promo code MY123CENTS. Right now you can save at least 10 percent on items. 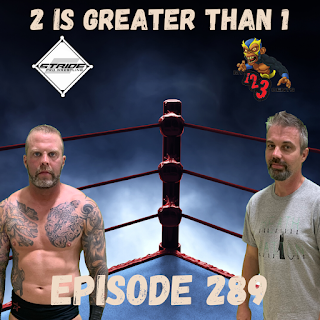 All of our lives have changed since the quarantine. Pro wrestling shows have a much different look these days. There are rumblings that once we return to ‘normal’ life, the way WWE presents its product could change forever.

This week on the show, I’m joined by Stride Pro Wrestling’s, Tyler ‘Heath’ Hatton. We talk about the house show business as well as share some of our favorite things about pro wrestling. Listen here and don't forget to leave a review!

Check out the Pro Wrestling Tees store too. And shop COLLARxELBOW with promo code MY123CENTS. Right now you can save at least 10 percent on items. 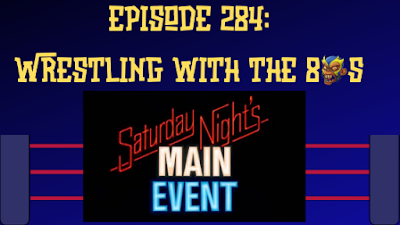 We’re just a couple weeks away from the 35 year anniversary of the very first Saturday Night’s Main Event. The show debuted May 11, 1985, from the Nassau County Coliseum.
So, I’ve turned to Jason Skull of the Skullbuster WrestleCast to take a trip down memory lane and chat more about that first episode. From Hulk Hogan to Roddy Piper to Wendi Richter, the show was stacked. Listen to the podcast here.
I’d love to know what you think about this show. Please follow My 1-2-3 Cents on social media: Facebook, Instagram and Twitter (@my123cents). You can also subscribe to the My 1-2-3 Cents blog and YouTube channel. And follow the Jittery Monkey Facebook page for updates too. Thanks!
Check out the Pro Wrestling Tees store too. And shop COLLARxELBOW with promo code MY123CENTS. Right now you can save at least 10 percent on items.
Posted by Kevin Hunsperger at 7:10 PM 50 comments: 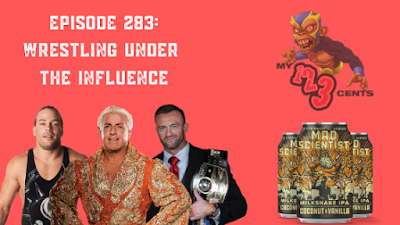 Pity Party, table for one. That is how this podcast may sound to some. However, that is not my intent. I had big plans for this week’s show since it falls on 4/20. You can read between the lines on who I wanted as my guest…
That being said, my attempts to get Rob Van Dam on the show turned into another failed experiment. So that got my brain churning and I thought, why not review a beer in my fridge called Mad Scientist Milkshake IPA. It’s from the Experimental Series by Witchita Brewing Company. You can visit their website here.
So this week you’ll hear me kinda rant and complain about the guests who I’d always wanted but never got. I also review the beer and share some thoughts on other aspects of pro wrestling.
Listen HERE!
Posted by Kevin Hunsperger at 11:32 AM 21 comments: 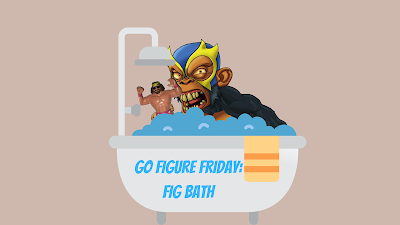 I've had my collection of LJN WWF Superstars for nearly 35 years. (I got my first set during the Summer of 1985.) However, I have never given any of these guys a much needed Fig Bath. The Major Wrestling Figure Podcast (hosted by Matt Cardona and Brian Myers) inspired me to do this (finally). So while experiencing some boredom, I filled up a small tub with hot water and dish soap and grabbed an unused toothbrush and five Superstars for their debut bathing. 'Rowdy' Roddy Piper, Brutus Beefcake, 'Macho Man' Randy Savage, Andre the Giant and King Kong Bundy were the first of my collection to take the plunge. I recorded it on time-lapse and it goes by pretty quick. Admittedly, I could probably give them all another good scrubbing but for the purposes of time, I made it as quick as possible. Have you given your figs a bath before? What do you use?

I've wanted to get back to blogging and other content creation since this whole COVID-19 quarantine stuff started. It was supposed to be a distraction from reality. Fun posts. However, as I make my blogging re-debut it is with a somber tone. This morning as I was just getting my workday started, the news of Howard Finkel's passing hit social media.

Finkel, aka 'The Fink' was the voice of my childhood. Heck, he was even the voice of many of the wrestling matches I watched as an adult. Simply put, news of Fink's death devastated me. There's no denying that he will go down as the GOAT when it comes to ring announcers. He's in a class all his own. Howard Finkel set the standard for what all of today's ring announcers want to be.

Many fans and wrestlers have been sharing their memories of Fink. We've all heard the iconic announcements he made through the years. "And NEW..." has become a phrase I believe we all associate immediately with Fink's style.

If there has been one person I've tried to emulate in my years on the independent scene of pro wrestling, it's no doubt the Fink. My current gig as ring announcer at Stride Pro Wrestling is the longest stint I've had (just over four years). It's a total ripoff of the legend as I attempt to announce a new champion being crowned. But as they say, imitation is the sincerest form of flattery. It's an homage to the man with the golden voice.

Years ago when Fink moved off-screen, I like many fans longed for the days of hearing him in the ring. That distinct bell ringing at Madison Square Garden and the microphone dropping down with Fink's familiar voice are imprinted in my brain. I can hear it all right now as I type this blog.

At the risk of rambling, I'm going to wrap it up here. I am grateful for the Fink being a part of our lives. I am grateful to have had the opportunity to see him get inducted into the WWE Hall of Fame in 2009 in Houston. And I'm grateful to have the chance to step into the ring and follow a dream of announcing the men and women making a name for themselves on the independent scene.