After failing the first time around, I finally got my hands on the Elite Mattel Slim Jim 'Macho Man' Randy Savage figure. I love the look of it and the presentation in the Slim Jim box. I've debated what I'm going to do with it. But for now, it's on the shelf in the My 1-2-3 Cents studio. 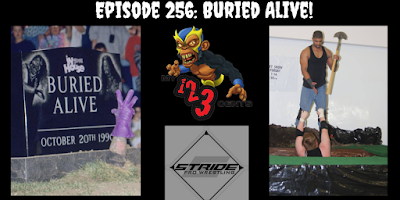 Buried Alive is a match concept only seen (as far as I know) in WWE. However, in 2017, Stride Pro Wrestling held a Buried Alive match. Red Daniels battled Chris Hargas in this historic event.

This week on the My 1-2-3 Cents Podcast, Red recounts that night and the build-up to it. We also discuss our favorite WWE Buried Alive matches.

Give the show a listen here.
Posted by Kevin Hunsperger at 10:55 AM 2 comments:

WWE has Hell in a Cell. WCW had Halloween Havoc. Stride Pro Wrestling has Fright Night. The October show is always a fun one to get into the Halloween spirit.  This year's event will be no exception as I find myself for the first time ever being an in-ring performer.

On Saturday night (Oct. 12) the men and women of Stride Pro Wrestling hit the ring at the Stride Arena (1130 N. Division St., Carterville). I'm excited because I'll be involved in the Boo Bash Battle Royal. This is great because I've never been involved in a battle royal before AND the winner will be a part of the main event later in the night. It'll be a fatal four-way for the Stride Pro Wrestling Heavyweight Title. Red Daniels defends against Ax Allwardt, Ryzer and the winner of the Boo Bash. 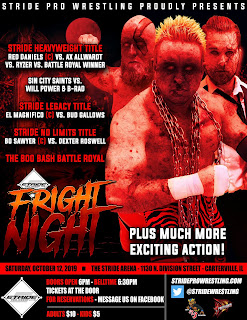 There are several other matches already announced for the show. El Magnifico defends the Legacy Title against Bud Gallows. The No Limits Title will be on the line as Bo Sawyer takes on Dexter Roswell. Also, the Sin City Saints (Jay Spade and Tony Flood) battle B-Rad and Will Power.

I've been told some wrestlers will be in costume that night. So fans, I encourage you to get dressed up too. Bell time is 6:30 p.m. We'll see you there.
Posted by Kevin Hunsperger at 8:49 AM 4 comments: 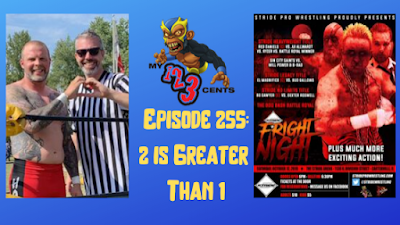 You can listen to this week's show here. And don't forget to give us your picks too.
Posted by Kevin Hunsperger at 6:33 PM 1 comment: