Scariest of All-Time: The Missing Link 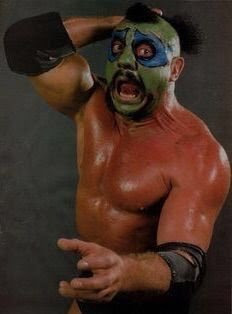 Early in my wrestling fandom, a bizarre wrestler entered the scene in World Class Championship Wrestling. He had green face paint, an indescribable haircut, and an impressive physique. He was the Missing Link.

The Link was part of Gen. Skandor Akbar's Devastation Incorporated. He came to the ring to Quiet Riot's Bang Your Head and put his head to good use. His headbutt devastated most of his opponents. The Link would leave WCCW and wrestle very briefly in the WWF. He was a member of the Heenan Family, but from what Bobby Heenan said in interviews years later, the Missing Link was a pain in the ass.

That being said, I always enjoyed his work. He wasn't a master technician in the ring. But he was entertaining. He stayed in character and instilled fear in his opponents' hearts and the fans watching each week. Even when he returned to WCCW and UWF and turned good, he was an intimidating force in the ring.

Sadly, Dewey Robertson, the man who brought the Link to life, died in 2007. Thanks for the memories.

Posted by Kevin Hunsperger at 7:49 PM