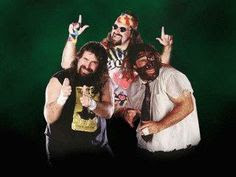 By Kevin Hunsperger
@kevinhunsperger & @my123cents on Twitter
Listen to the podcast
Follow my blog with Bloglovin
One person, three personalities. That's the best way, to sum up, Mick Foley, right? Although some might argue four personalities when you add Mick to the equation. However, for this blog, I'm focusing on Mankind, Dude Love, and Cactus Jack.
Of course, fans were first introduced to Cactus Jack. I remember seeing him in wrestling magazines first, being involved in bloody battles both here in the United States and Japan. Then he emerged in the UWF (Herb Abrams) and eventually WCW and ECW. Jack was a dangerous and scary figure in the ring, putting his body on the line and taking more out of himself than his opponents.
In the WWF, Foley became Mankind. Personally, that's my favorite incarnation of the character. I feel like it had the most depth and grew the most over time. In the early stages, his music and his screeches sent chills down my spine. But even as a good guy, carrying a sock (Socko) and writing books, you still knew this guy was badass and meant business.
Dude Love, while less violent, was no less scary. To think all of these characters were in Foley's head at the same time was nothing short of impressive. His trifecta at the 1998 Royal Rumble was one for the ages. I can't put over enough how much I have grown to appreciate and respect Foley through the years. He's made such a mark on the world of pro wrestling. Thanks, Mick!
Posted by Kevin Hunsperger at 7:20 PM