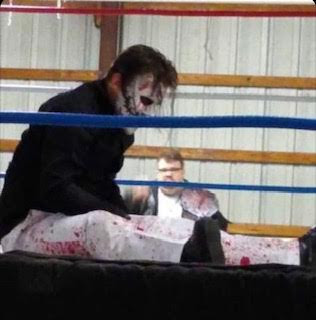 By Kevin Hunsperger
@kevinhunsperger & @my123cents on Twitter
Listen to the podcast
Follow my blog with Bloglovin
I've sung the praises of Dexter Roswell in the past. Roswell is a product of the Stride Pro Wrestling Training Academy for those who don't know or don't remember. Four years ago, when he debuted, Dexter Roswell was a snobby political character who insisted on using hand sanitizer after making contact with fans. In hindsight, he may have been on to something in 2016...
Over the years, the character, like any good one, has evolved. Fans in Stride are getting a taste of 'Bloody' Dexter, a character first developed in Cape Championship Wrestling. Roswell is clearly a troubled individual as he comes to the ring with a different persona at each show. He's unpredictable and, along the way, has developed a much needed mean streak.
He really rose to the occasion back in March at Strideiversary when he captured the Stride Pro Wrestling No Limits Championship. Bloody Dexter pulled out all the stops and did what it took to win. I salute his efforts in the ring and look forward to seeing what is no doubt a bright (or dark) future for the macabre Dexter Roswell.
Posted by Kevin Hunsperger at 7:48 PM