Kevin has written a few blogs about trying to alter his lifestyle and become more fit as he approaches 40 in the next couple of months. While I still have a year to go before hitting the milestone, I myself have been saying I need to change up my habits and lead a healthier lifestyle. The big question was how did I want to implement this change and could I stick with it.

Last August, a friend gave me the P90X workout. I started doing the daily workouts and had a good routine going for about two weeks. Then my chaotic lifestyle kicked in again and I was having trouble finding time to squeeze in a workout just one day a week.  Needless to say I stopped even trying to convince myself I was going to be able to achieve the goals I had set for myself and went back to living my normal life.

As the end of the year drew near, I started thinking about new year resolutions and with Kevin doing his “Facing 40” series, I found a motivation to stop making excuses and follow through with getting into shape. After all, I can’t have Kevin showing me up in New Jersey for Geek Week. He’s the married one with kids. I’m supposed to be the cool one. Right?

Initially I had planned on going back to P90X. I knew the workouts and they were something I could do at home on my own schedule. The problem quickly arose where instead of staying home at night as I planned, I was once again finding myself going out with friends to movies or special events and not getting home until 11:00 at the earliest. Doing an hour-long high impact workout at that time just wouldn’t work. I thought maybe I could get up an hour earlier every day and do the workout at 5:30. However, because I am usually awake every half hour starting around 2am, I could never motivate my body to get out of bed at 5:30. Two weeks into the new year and I had only done one work out. It was looking like my lack of focus and determination would come back to sabotage me once again.

One day while talking about my lack of workouts with a co-worker, he mentioned he had just gotten the DDP Yoga DVDs and was going to give them a try. I knew former wrestler “Diamond” Dallas Page had come up with a yoga routine, but I had never actually looked into finding out what it entailed. Doing a quick YouTube search, I found the video of Arthur Boorman, a former paratrooper who went from not being able to walk without assistance to
being able to run.

I was intrigued to know if DDP Yoga was really that good or if Arthur’s story was the exception to the rule. After watching some other videos and reading blogs from people trying DDP Yoga, I decided to order the DVDs and give it a try.

One of the aspects I was most intrigued with is DDP Yoga is a No Impact workout. I was born without the upper part of my right hipbone. As a result, my right leg is about 1.5cm shorter than my left. It also means I have less range of motion in my right hip and have occasional hip pains. One of the issues I found with the P90X workouts was the amount of lunges would usually cause my hip to flare up in pain. I have been advised by my doctor in the past to do normal activities and if I experienced pain to stop. Basically I need to not take it too easy because I need to strengthen the hip as much as possible. Getting back to the DDP Yoga program, I was curious to see if I’d be able to perform the yoga positions with my hip not having full range of motion and if the moves would produce pain.

I borrowed my co-workers DVD and went through the Diamond Dozen, which are the 12 basic positions/moves, used in the workouts. There was only one move that I couldn’t do as well as I had hope. With a confidence that I would be able to do the workouts, I went ahead and order all three DVDs, bought a heart monitor and then waited for my package to arrive. 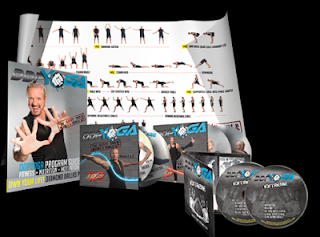 The DVDs arrived on Tuesday and it was time to take the first step to living 90% as DDP says. I started off with a refresher of the Diamond Dozen before moving onto the Energy workout.  For about the first half of the program I questioned if this would really work as I didn’t feel like I was working out. By the end of the workout though, I had worked up a sweat and could feel my body asking was going on, as it wasn’t used to being this active. This morning I woke up and did the Wake Up mini-workout.

In addition to being No Impact, the workouts appear to be 20-30 minutes long, which will hopefully be easier to accommodate my schedule, though I have done well the past two weeks of not being as crazy busy. Plus, technically the DDP Yoga system is scheduled for every other day though as DDP mentions, you can customize the workouts depending to fit your schedule.

It’s only been one day, but given the relative ease of the workouts, the fact I’m putting this out for the world to see so I’ll have some accountability as I don’t want to look like a quitter, and my personal competition with Kevin, I can see myself sticking with it and hopefully I’ll get the results I’m aiming to achieve. The hardest part will be changing my eating habits. As a confirmed bachelor who is used to fast food and take out, actually buying groceries and cooking meals could take some time to become a normal occurrence.

My goal is to provide updates every 30 days. If I have success with this, hopefully it’ll help someone else who is trying to lead a healthier life. For more information on DDP Yoga, click here.  If you have success stories of your own or are trying to get in shape/live healthier yourself and want to share your progress, let us know on the My123Cents Facebook page or Twitter.

Update:  Kevin has started the program too:

Posted by Kevin Hunsperger at 1:22 PM