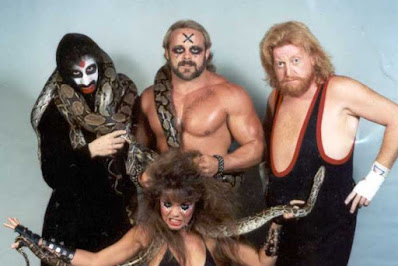 By Kevin Hunsperger
@kevinhunsperger & @my123cents on Twitter
Listen to the podcast
Follow my blog with Bloglovin
Kevin and Nancy Sullivan scared the crap out of me as a kid. I'd read about them on the pages of the Apter mags. The couple made us all believe that they worshipped the devil. Nancy, of course, was the Fallen Angel. Those pics of them on the beach wrapped in snakes along with the likes of Purple Haze, Bob Roop, and Oliver Humperdink haunted my young brain. The group was known collectively as the Army of Darkness.
I don't remember seeing Sullivan on TV until he signed with Jim Crockett Promotions in 1987. I thought he was an odd choice to manage the Varsity Club, but eventually, he'd become the leader of the Dungeon of Doom. While that group was more cheesy than scary, it seemed like the perfect fit for Sullivan.
Fallen Angel went on to become Woman and managed Doom and was associated with the Four Horsemen before her new husband Chris Benoit left the company for WWE. Sadly, we all know how that story ended.
Nevertheless, Sullivan and Angel were an odd couple of the 80s and one that convinced a lot of fans they were the personification of evil. To this day, some people believe Kevin Sullivan is a Satanist. He was that convincing in his role.
Posted by Kevin Hunsperger at 8:15 PM