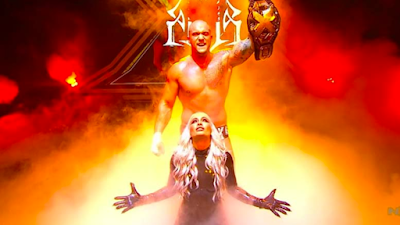 By Kevin Hunsperger
@kevinhunsperger & @my123cents on Twitter
Listen to the podcast
Follow my blog with Bloglovin
Karrion Kross is probably my favorite 'newcomer' in 2020. Even though he's been wrestling for years, I only first became familiar with his work in Impact Wrestling. I was impressed with the little bit that I did see of him there. Now that he's in NXT/WWE, I've come to appreciate him even more, coupled with a podcast interview he recently did with Chris Van Vlet.
Now for the scary part. Kross' look is one meant to intimidate his opponents. He's someone that if you run into in a dark alley, you'd immediately turn around. I think even in daylight, he would send you in the other direction. He doesn't step away from anyone and goes toe-to-toe with each opponent that tries to stop him.
He and Scarlett Bourdeaux's entrance on NXT is nothing short of awesome. These two are the future of the company. When Kross got hurt in his championship match against Keith Lee was a huge letdown. I hope that he comes back better than ever at the top of the card once he's healthy enough to get back in the ring.
Posted by Kevin Hunsperger at 7:19 PM