If you watched any of Tough Enough for this past spring, you heard the trainers telling the men and women wanting to follow in their famous footsteps that they had to do something to get themselves over.  It was almost a weekly sermon (or so it seemed).

Zack Ryder has probably used that mantra to his advantage more than anyone else on the active roster.  His Z True Long Island Story is a YouTube sensation to say the least.  Daniel Bryan has jumped on board too, and is now on YouTube as well as Zack's former partner Curt Hawkins. 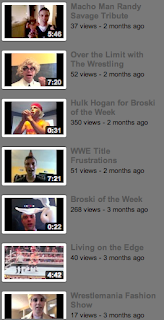 So as a wrestling fan and a blogger who is trying to be taken seriously (seriously being a relative term here), I'm dedicating this post to a little cross promotion.  I'm attaching some of my favorite videos from the My 1-2-3 Cents YouTube Channel (many of them have hardly been watched) in an effort to get myself over.  This site gets roughly 200 hits a day, so I thought it can't hurt.

On the YouTube channel, you'll find several different wrestling characters I've created.  I did that because my first round of videos weren't getting watched at all.  A friend (who is not a wrestling fan) suggested doing something a little wacky to get noticed.  It's kind of worked, but I still don't have a lot of views. So please watch and tell me what you like and what you don't like.  I'm looking for honest feedback.  On a positive note, I was Broski of the Week in Episode 22.  WWWYKI!

I also want to thank you for reading the blog or watching the YouTube channel.  I also encourage you to subscribe to both and tell your friends about us.  Wrestling has been a hobby for nearly 30 years,  and outside of my family and friends (some anyway) it's the greatest joy in my life.  Pathetic, maybe.  But it's how I feel.

So please, check out these vids, and thanks again for your support.

Posted by Kevin Hunsperger at 12:35 PM