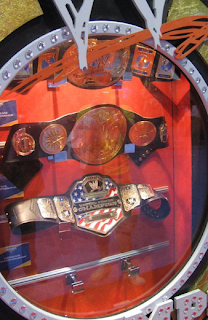 I watched SmackDown! live for the most part tonight.  It's the first time in weeks that I've actually watched the show.  And overall I would say it was a pretty good night.  It seemed fresher to me than what we've been watching on Raw for the last few weeks.

The matches on SmackDown! were really good.  Christian and Sin Cara, and Ted DiBiase and Daniel Bryan were particularly good.  Kane beating Wade Barrett was disappointing.  Not sure what's going on with his future.  More on that in a future blog.

I want to focus this writing on the Cody Rhodes-Ezkeil Jackson match.  The two met, and honestly I fast forwarded through the intros and missed that this was a non-title affair.  So when I saw Cody get the pin, I was happy thinking we had a new Intercontinental champion.  Then I watched his hand get raised, but not the title.  So, Zeke will keep the belt.

It seems lately there have been a lot of non title matches on WWE programming.  Correct me if I'm wrong, but none of the matches on the Raw Roulette show Monday were title matches.  R-Truth beat WWE champion John Cena in a tables match, Kofi Kingston pinned U.S. champ Dolph Ziggler, and Divas champion Kelly Kelly beat one of the Bellas (but it was billed as a non-title match)

I think non title matches are okay from time to time, but I think it makes the champion look weak.  Right now in particular, I think the WWE needs to do more to build up the champions they have (not John Cena and Randy Orton obviously)  While I like the fact that Cody got the win over Zeke, I would have rather he got the belt too.  Why not have Jackson retain and actually make your champion look strong?  It's disappointing.

Not only do I not understand the lack of title matches, I don't get why we haven't seen the tag team titles defended on Raw or SmackDown!  It's really disappointing and further evidence that the WWE doesn't really care about the tag team titles.  They weren't on SD at all, and Monday night they were used to put Shawn Michaels over, who was on promoting a hunting show.  WTF? We've ranted on that plenty of times before in blog and video form, so I won't bore you again with that sermon.