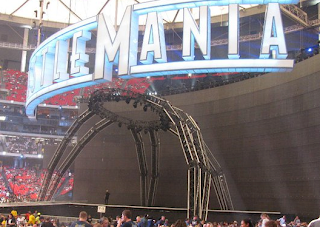 My partner in crime, Chad and I were talking earlier about Wrestlemania.  We're making plans to attend in Miami and had a brief discussion about the lack of top tier talent on the WWE roster right now.  As of July 9, 2011, there are only a handful of "main event" type guys.  Let's take a closer look.

Over the last year and half or so, the company has lost top guys like Shawn Michaels, Batista, Chris Jericho, and Edge.  Triple H and the Undertaker are essentially done.  We haven't seen them on TV since Wrestlemania 27 (which was 3 months ago).  There are rumors that Rey Mysterio is nearing the end of his career.  Big Show is pushing 40 and Kane is in his 40's.  They're not going to be around forever.  And the company has done a poor job of elevating anyone into those open spots. 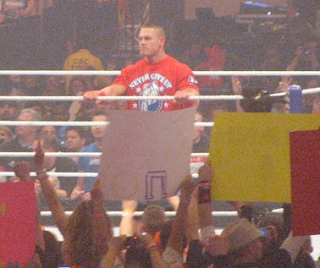 John Cena is obviously the top dog in the company.  Storyline wise, that could come to an end at Money in the Bank, but I think we all know Cena won't really get fired if he loses to CM Punk on July 17.  He's already booked in the main event for Wrestlemania 28 against the Rock.  So he may take a brief hiatus, but most likely he'll find a way back on WWE programming if he does lose the title and his job at MITB.

Randy Orton is right behind Cena in terms of the company pushing to the moon.  Personally, I don't understand, but to each is own.  I'm not a fan of Orton as a face, but I find him a bit more tolerable as a heel.  Right now though, he's the man on SmackDown, and unfortunately I don't see that changing anytime soon.

CM Punk is the #1 contender to John Cena's title.  Right now there's so much mystery surrounding his current status with the company.  I've remained steadfast and not read any spoilers, but I've seen headlines suggesting Punk's last match with the WWE is just 8 days away.  I certainly hope that's not the case.  Punk is in my opinion the best heel in the WWE right now.  I use they'd use him better though, and not to put over Cena and Orton like he's done in the first few months of 2011.

Christian is the #1 contender to Randy Orton's world title.  But after several chances to win the gold, I can see him coming up short again at MITB and going back to the upper mid card status.  That is unfortunate, as I think Christian has so much potential and I'd love to see him with a legitimate run as the champ.  He's the best guy on the mic on SmackDown! and despite "17 years of experience" he is still great in the ring. 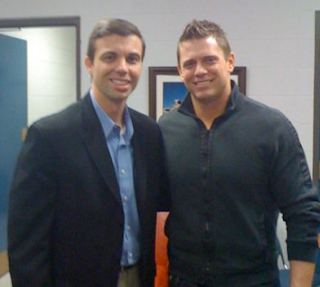 The Miz has unfortunately fallen from grace faster than any other past champ since Jack Swagger.  The constant jobbing to Alex Riley and losing to Roddy Piper and Jerry Lawler earlier this year haven't help the Miz's stock.  At one point I read Vince McMahon referred to the Miz as the future of the company.  I hope they turn him around and get him back on a winning streak.  He's got a ton of potential as a heel and they need to utilize him better.

Sheamus is growing on me again.  He was red hot (pardon the pun) when he first came in.  I think that actually hurt him.  They pushed him too fast, too soon.  He's climbing the card on SmackDown!, but will he stay?  He's another one the company has been luke warm with in terms of pushing.  He truly has the ability to be that monster heel the WWE desperately needs.

John Morrison is my pick to be elevated in 2011.  He's been around long enough and has proven he can put on a hell of a show.  His mic skills need some help, but he's coming around.  I also like the idea of turning him heel again and putting him with a manager.  In a previous post I had suggested that manager being Ric Flair himself.  I know that's a LONG shot.  But the point is, let Morrison climb that ladder.  It seems like they push him for a bit, then pull back the reigns.  Let him go!

Dolph Ziggler is right behind Morrison in my book of pushing guys.  He's a great heel.  I wouldn't even be opposed to seeing he and Morrison put together in some kind of heel faction.  Ziggler is recognized as a former World champ after his brief run with Edge, but he needs an actual reign at some point.  As US champion, he is continuing to develop.

I really thought Kofi Kingston was going to get the rub back in 2009 when he feuded with Randy Orton.  But Orton got the upper hand in that program.  I was baffled by that decision and thought it was the perfect time to bring someone new into the main event mix.  Now he's stuck in that upper mid card, and since he's lost the US title, I fear he may slip and end up lost in the shuffle.

Alberto Del Rio is another character who is growing on me.  While I wasn't crazy about him winning the Royal Rumble, I was glad he didn't beat Edge for the World title at Wrestlemania.  I'd rather see Del Rio have a run as US champ before they put the big title on him.

I wrote about Wade Barrett early this week.  Click here for more on that.  I like the guy a lot and think he could and should be in the main event.  Same goes for Drew McIntyre.

Daniel Bryan has been up and down the ladder in terms of his push.  When he first came back after being fired, he was getting jobbed out constantly.  Then they put the US title on him, I had some hope.  I was really disappointed that he lost it and then stumbled out of the spotlight.  He has plenty to contribute to the company and should get a run as Intercontinental champion.

I have similar feelings on Cody Rhodes.  But I like how they've had he and Ted DiBiase teaming up.  I want to see the tag team division resurrected, and feel like the reformation of "Priceless" could be the shot in the arm the division needs.  I like both Cody and Ted as singles wrestlers too, but I don't see them getting any big pushes as individuals right now.

These are guys who I think could move up to the ladder and into the main event spot light.  Obviously there's not room for all of them at the top.  But right now I don't feel like there's really any contenders for the big titles.  There's lots of guys on the midcard, with Super Cena and Boy Orton as the only "top" guys.