Thirteen months ago I think most fans would agree that Wade Barrett was the hottest prospect in the WWE.  He was the leader of the renegade group The Nexus.  The 8 members attacked John Cena, CM Punk, Luke Gallows, Justin Roberts, and Jerry Lawler on the June 1, 2010 edition of Monday Night Raw.

The attack was the talk of the wrestling world for the weeks that followed.  This group was made to look like unstoppable.  They were ruthless and attacked other wrestlers and Hall of Famers in the months that followed.

Barrett was put in charge of the group.  It was a role that made sense at the time.  He had just been crowned the winner of the first season of NXT.  He had a good look.  He was decent on the mic, and he could wrestle.  Then for some ridiculous reason they fed Wade Barrett and the rest of the Nexus to John Cena.  One by one, Super Cena made all these future superstars look like chumps.

The group teased several breakups, and by the start of 2011, they had fractured and CM Punk took the reigns of Nexus.  Barrett moved to SmackDown! with Heath Slater and Justin Gabriel.  The trio was joined by Ezekiel Jackson to create the Corre.  I think they chose that name because it rhymes with bore.

They got booked into some crappy angles, including a mini feud with Apple.  Ugh.  During this time, Barrett did win the Intercontinental championship.  But for the most part it was a pretty lackluster run.  He didn't defend the title at Wrestlemania.  Instead, he and the Corre were booked in a 92 second match against Kane, Big Show, Kofi Kingston, and Santino Marella.  By the way, Snooki's match went longer than that.  Just sayin'... 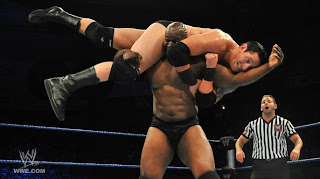 In the few months that have passed, Barrett has now dropped the IC title to former Corre mate Ezkeil Jackson.  And most recently, he jobbed to Kane on SmackDown!  There's nothing wrong with losing to Kane, but when you've got a guy who is climbing up through the ranks, I think a guy who's been around for 14 years should put him over.  That's a big problem in the WWE right now.  They've lost top talents like Undertaker, Triple H, Batista, Shawn Michaels, and Chris Jericho, yet they've still not pushed anyone into those spots.  We've still got Cena and Randy Orton as the companies top two.  But after that, who is there?

When I first started this blog in September 2010, I wrote about ending the Undertaker's streak and named Wade Barrett as the man to do it.  I have since change my opinion to say that I don't think the streak should ever end, and I definitely don't think it should be Barrett to do it.  This is no fault to Barrett.  He just seems to be lost in the shuffle.  I had hoped the IC title run would have been a bit more dominate and would have propelled him to the next level.

But what I think happened with him and all the original Nexus members is they got caught up in that early feud with John Cena.  That should have come further down the road.  Besides attacking and beating up guys, they weren't put over anyone in the ring.  It hurt their credibility.  It's still having an effect on Wade Barrett, the most gifted one of the group.

Now that it appears he's through with the Corre, I hope they put a focus back on him as a singles competitor.  Quit trying to make him the leader of a group.  Instead, pair him  up with a manager.  In the past I've suggested William Regal, and I stand by that idea.  Push him as the tough guy he really is.  Or there's the option of killing two birds with one stone, and give him a tag team partner.  Actually, kill 3 birds and team him up again with Drew McIntyre. You give two guys who have a ton of potential something to do and help to revive the tag team situation.

I still think there's hope for Wade, but the company needs to get behind him, and he needs to run with the ball if and when they finally hand it to him.  Not that I think he's reading this, but Wade you can do it!