Saying the "B" Word 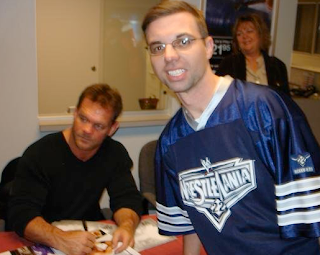 @kevinhunsperger on Twitter
Earlier this week, the WWE released a DVD of their choices for the Top 20 Superstars of the 21st century.  While I agree with most of the choices, there is one name missing from the list.  Chris Benoit.  Yeah, I said it.  Now I am not surprised by this omission, but I am disappointed.
Here are the guys who made the cut. Chris Jericho, Edge, Triple H, JBL, Kane, Kurt Angle, The Rock, Randy Orton, Brock Lesnar, Trish Stratus, Jeff Hardy, Big Show, Eddie Guerrero, Shawn Michaels, Booker T, Stone Cold Steve Austin, The Undertaker, Rey Mysterio, Batista and John Cena.  Chad shared his thoughts on why The Rock and Stone Cold don't belong on this DVD.  You can read that blog by clicking this link.
I agree with Chad on that issue.  But I don't know if we agree on the Benoit issue.  It's not something that we've had a lot of discussion about.  I've already written a piece about my thoughts on Chris.  I was a big fan of his and like everyone else, I wish the tragic events from June 2007 never happened.  But they did.  So do you erase everything he did?
I was happy to hear Ric Flair mention Chris Benoit by name during Flair's 2008 Hall of Fame induction.  This was less than a year after the murders/suicide and the first time we'd heard those two words uttered by a WWE employee in a public forum.  However, the powers that be dubbed out Benoit's name for the Ric Flair DVD that was released later that year.
One thing that did surprise me was the fact that Chris made the WWE Encylopedia.  It was released in 2009, two years after the incident.  There's actually a pretty big photo of the former world champion along with several paragraphs talking about him.
WWE Chairman Vince McMahon said a couple of years ago (2 years removed from the tragedy) "It's not right to pretend he didn't exist. It's one thing to include him as part of a historical perspective, which I believe is OK, and it's another thing to promote him, which is not OK. The situation is very similar to that of O.J. Simpson - despite his controversy, O.J. was still a part of the NFL scene. You can't deny that he existed."
But by excluding Benoit from DVD's and even the promo video from the first Money in the Bank, aren't they denying his existence?  Then there's leaving him out of the recent Wrestlemania history DVD.  The main event from Wrestlemania XX featuring Benoit, HHH, and Shawn Michaels was a classic.  I know it's a gray area, and pretty controversial as well.  I also question my own beliefs because I wonder if this were a wrestler I didn't like, how would I react?  I hope we're never faced with that situation again.
The point of this post is, I do believe that the other 18 men on the DVD are the best of the 21st century.  Like the previous post stated, we are not taking anything away from Austin or the Rock, but let's face it, Rocky was gone for most of that decade.  Austin wrestled very sporadically.  I'd put Benoit in there along with Rob Van Dam.
Again, I'm not excusing what Chris Benoit did to his wife Nancy and their son Daniel.  But as a wrestling fan, it's hard to watch him completely erased from the archives of WWE programming.  I also wonder if there is a fear over legal action from the Benoit family or Nancy's family is preventing the WWE from doing any more than they do.  It'll be interesting to see if we ever hear the "B" word again on WWE programming or see him in the Hall of Fame one day.
As always, thanks for reading this.  Leave your thoughts here.  Or head over to Facebook, Twitter, or YouTube and share your opinion.
Posted by Kevin Hunsperger at 8:12 AM