Layin' the Smurf Down! 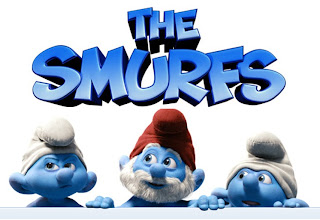 Yeah, I'm going there.  For people who know me, besides my love of wrestling, I'm quite fond of Smurfs.  I remember when the cartoon came to NBC along with the toys, lunch boxes, and tshirts.  I was in third grade and became instantly hooked.  It's an obsession that never left.  In fact, I still have all those little rubber Smurfs, along with the drinking glasses sold in Hardee's restaurants in the early 80's.

Anyway, since today is the premiere of the Smurfs Movie, I decide to tie my two loves together.  So, I'm casting wrestlers past and present to play Smurfs.  I'm basing my decisions on personality and appearance in most cases. 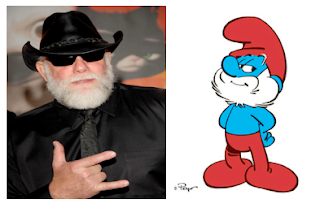 Randy Savage (Retired) as Papa Smurf:  This was actually the hardest one for me to cast.  After consulting with Chad, I decided to go with the retired "Macho Man" Randy Savage.  My decision was mostly just based on appearance.  After he left the ring, Savage let his hair and beard go gray.  He really does look kinda like Papa Smurf, don't you think? Personality wise, Savage was a leader for a long time in the ring and in the locker room.  So we'll give him credit for that too.  I wonder if Papa could do an elbow drop? 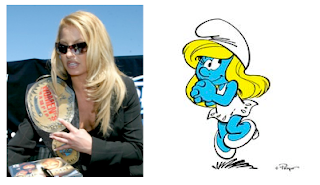 Trish Stratus as Smurfette: Both are strong, beautiful, and independent.  What more can you ask for in a lady, right?  I picked Trish over Kelly Kelly because like Smurfette, I think when the going gets tough, Trish could hang with the guys better than Kelly Kelly can. When the chips were down and the Smurfs were in danger, Smurfette stepped up to help.  Trish exhibited the same qualities when she was in the WWE.  And she's the opposite of Smurfette who went from dark hair to blond.

John Cena as Hefty:  There were plenty of choices for wrestlers who could have played Hefty.  If you watched the cartoon, you'll remember he was the strong Smurf who always seemed to save the day.  Or often times he did.  It's much like the John Cena character on Raw.  Super Cena is a legit powerhouse and is always overcoming the evil doers in the WWE. 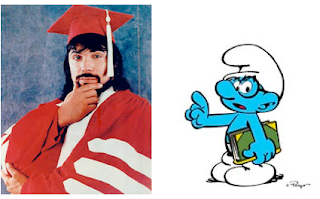 The Genius Lanny Poffo as Brainy: This one was a no brainer.  The Genius character could have very well been a tribute to Brainy Smurf back in the late 1980's.  Poffo had always read his poetry, even as a babyface.  But when he turned heel, he got more smug and arrogant about it.  Just like Brainy.  He was always reading from his book of quotations, and usually ended up making the others in the village mad and getting his butt kicked.  Just like Lanny. 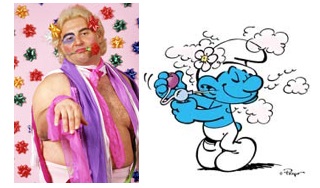 "Adorable" Adrian Adonis as Vanity: If the bows and ribbons fit... Vanity could have also been played by a number of other wrestlers through the years including Gorgeous George, Orlando Jordan, or The Model Rick Martel.  I chose Adrian because I felt like he was really under appreciated during his run with the WWF.  Clearly his gimmick was just like Vanity's.  They both enjoyed lace and flowers and mirrors.  While neither character was ever officially out of the closet, there were plenty of assumptions made that each was gay.

Doink the Clown as Jokey: Both of these characters seem made for each other too.  Each pulled a variety of pranks on their peers.  Doink of course started off evil and eventually turned face, tricking the WWF's biggest villians.  Jokey did the same thing when it was time to save his fellow Smurfs from their nemesis Gargamel.

Shockmaster as Clumsy: This may be the meanest pick of the bunch, but in my opinion the funniest.  If you've never seen Shockmaster's debut, I suggest clicking here and watching it on YouTube.  He tripped and feel and pretty much killed his character immediately.  As far as Clumsy goes, he was my favorite Smurf when I was a kid.  He was down to earth and likable.  I'm not so sure the same can be said for Shockmaster.  But again, it's that one trip that lead to this choice.

Randy Orton as Lazy: Okay, this one is probably more mean than the Shockmaster one.  It's not that I think Randy Orton is lazy at all.  Rather when he's on TV, I want to go to sleep.  Sorry, I find him boring and really one dimensional.  Randy works hard, I'm just not overly found of him or the alleged attitude he has outside the ring.

Triple H as Handy:  It's not so much that I've ever seen Triple H build anything.  And I really hope he doesn't end up destroying the WWE dynasty.  I picked Trips to play the role of Handy because of the sledge hammer of course.  Also, Handy was the hardest working Smurf in the village.  Some could argue that Trips is one of the hardest workers in the WWE with both his work inside the ring and now as an executive with the company.  (Note, this is a butt kissing attempt to get a job with the WWE in case Triple H is actually reading this post.) 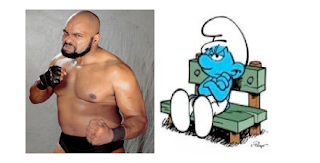 Bad News Brown as Grouchy:  Was their a more angry WWF (or WWE) superstar than Bad News Brown?  The dude was always in a bad mood.  Just like our boy Grouchy.  Although deep down, Grouchy had a soft heart.  I think had Brown stuck around in the WWF, we would have seen him soften up with a face turn.  I'm just guessing though, but it seems that even the baddest of the bad guys eventually have a change of attitude while in the E.

R-Truth as Harmony:  Jillian Hall could have just as easily been put in this role.  Whenever Harmony tried to make "music" it sounded horrible and drove the other Smurfs nuts.  It's the same thing when R-Truth does his "What's Up?" rap.  That's been the best part of his heel turn.  No more (c)rap. 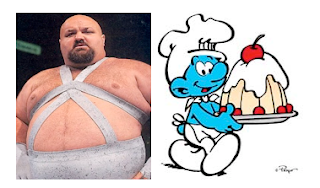 Bastion Booger as Greedy:  I couldn't really think of anyone for the role of Greedy and kept coming back to Bastion Booger.  For those who watched the cartoon, you know that Greedy loved to cook, but he loved to eat even more.  Obvisously that's why they called him Greedy.  I seem to remember an angle or a stunt with Bastion where he consumed mass quantities of food on Raw or Superstars, so that's why I went with him for this role. 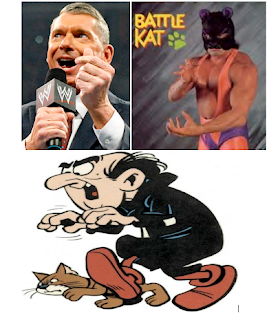 And finally... Vince McMahon & Battle Kat as Gargamel & Azrael:  I really don't think Vince wants to eat his wrestlers.  But I do think he'd like to turn them into gold (or green), just as Gargamel planned to do.  And of course, Battle Kat was already cat like so it only make sense to make him Azrael.  How many of you actually remember Battle Kat?  Anyone?


Vince has played that evil character so well in the past, feuding with his superstars and with those he created.  It's very similar to Gargamel feuding with Smurfette after creating her.  It may be a stretch.  I had considered Papa Shango because of the wizard/magic stuff that he did back in the day.


I hope you enjoyed this.  It was a lot of fun coming up with this list.  But also very time consuming.  I think I covered most of the major Smurfs.  It turns out everyone I casted has a connection to the WWE.  That wasn't intentional.  I basically went with who came into my thoughts first.  Who would you cast?  Leave your comments here or on Facebook, Twitter, or YouTube.
Posted by Kevin Hunsperger at 8:59 AM