No French hens on the third day of wrestling Christmas.  Instead, we've got three French Canadians.

Of course you know the fellas in the picture.  It's Rene Dupree and Sylvain Grenier, La Resistance.  These two debuted as a tag team in WWE back in 2003.  This was a time the tag team ranks were stronger then they are today, but the division was starting to slip.

This version of the team held the tag team titles one time.  It wasn't long that they added a third member, an American named Rob Conway.  Conway and Grenier went on to hold the tag titles three times.

Eventually Dupree would move to Smackdown! and try his luck as a singles star (he didn't fare too well)  Conway and Grenier would stay together for a while, but like most teams in modern day WWE, the two ended up splitting and then feuding, albeit very briefly.

Dupree and Conway were saddled with really lame singles gimmicks.  It didn't take long before all three men were "future endeavored."  Grenier and Conway still team up on the independent scene and Dupree wrestles in Japan now.  He has a much different look now and said in a recent interview he doesn't miss his days in the ring here in the States. 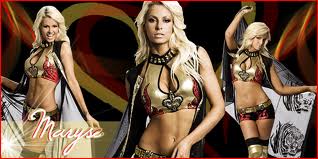 Maryse has come a long way since arriving in the WWE.  She worked in the OVW honing her skills back in 2006 before finally making it on TV in 2008.

My first thoughts of her was that she was nothing more than eye candy, someone for Jerry Lawler to oggle over.  And while she is a beauty, she can really work too.

I think she's developed a lot in the ring over the last couple of years.  Although she now seems to be stuck with this Ted DiBiase valet gimmick.  She's done some wrestling, but nearly as much as before.  I'm not sure if she's recouping from an injury and taking it slowly.

My favorite Maryse moment was back in November 2009 when she showed up on Raw dressed as the Gobbledy Gooker and attacked Melina.  The initial attack went off great, but then when it came time to shed the turkey legs, she ran into some problems.  But she covered well (as did Melina) and continued to lay the smackdown on the fallen divas champion.

Her finishing move is called the French kiss.  It's an exaggerated DDT, which is actually one of my favorite finishers anyway.  Having it done by a beauty like Maryse makes it all the more awesome.  Okay, I'm starting to sound like "the King."

Anyway, I'm hoping Maryse gets back into the Divas title hunt in the new year.  The division needs some work, and I think she definitely brings something to the table.