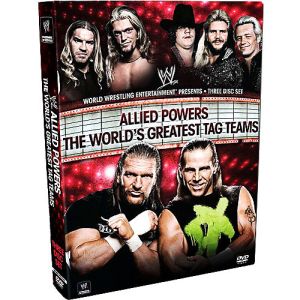 Gone are the days of tag teams like Demolition, the British Bulldogs, and the Hart Foundation.  At least that seems to be the case in the WWE for now.

Over the last three years there have been more than a dozen sets of tag team champions. And with the exception of the current champs, not a single pair is still together.  That blows my mind.

So we're going to create some new teams.  Your mission, if you so chose to accept it is to create 5 new tandems.  The rules are simple.  Just use any two guys on the roster to create your duo.  Feel free to use guys on the FCW roster too.  Injured guys can be used.  And feel free to come up with cool team names.


Here are my picks:

1.  Kaval & Evan Bourne:  These two seem to be a natural fit.  They're both high flyers and can move around the ring.  Their mic skills need some work, but I don't remember the Bulldogs or the Killer Bees pulling off any great promos back in the day.  Both seem to be lost in the mid card shuffle right now.  Of course Bourne is hurt right now, but once he returns it would be nice to see him be used for something other than bait for the Nexus.  Besides an Intercontinental title match at Survivor Series, they don't seem to be doing much with Kaval either.  I think these high flyers could do some great things in the ring against Justin Gabriel and Heath Slater.

2. Husky Harris & Michael McGillicutty:  Two third generation stars who were quite impressive on NXT season 2.  Right now they seem to be floaters in the Nexus.  They could stay in the group and still form a team.  I really like Husky Harris.  I think he's got a great future in the business.  McGillicutty has a lot of potential.  My only problem with him is I feel like he, more than Husky is living in the shadow of his famous father.  But this could be a great heel team.  I think I'd pair them with a manager too.  I think we need more of them.

3.  Drew McIntyre & William Regal:  I know Regal is checking out soon (allegedly) but these two could be paired as the evil anti American faction.  McIntyre has a ton of potential and I think Regal could help bring out the best in him.  Perhaps Regal starts off as a member of this team and brings in Mason Ryan (FCW champion) to replace him.  Regal then becomes the manager of the team, much like he had done with Koslov and Ezekiel Jackson.  Ryan is Welsh, so you'd still have the un American sentiment going.  The only thing I'd do is try to change his look a bit.  He looks way too much like Batista.

4.  Ezekiel Jackson & Zack Ryder:  Hear me out on this one.  I'm imaging a modern day Power and Glory on this one.  Zeke obviously as the power.  Ryder: the glory.  I like Zack.  I think he's obviously way underused and could benefit by moving back into the tag team division.  Although Zeke seems to be getting a bit of a push in the singles ranks.  Maybe he could be replaced by Chris Masters as the power.

5.  Peter Orlov & Jinder Mahal:  Sorry, this is one just based on the appearance of these two guys and some of the things I've read about them.  This is another throw back of a team from the past:  Nikolai Volkoff and the Iron Sheik.  Hopefully Mahal would have more luck with the Middle Eastern gimmick than Mohammad Hassan had a few years back.  That would give you two anti American teams though, not sure that it's necessary.

Other possibilities would be the DiBiase brothers (Brett & Ted), The Colon Brothers (Primo & Tito), and Michael Tarver & Darren Young as some sort of Nexus castoffs.

Now obviously not all these teams would wear the belts.  As singles wrestlers, they'd probably need some repacking and makeovers so they have a more uniform look like teams from the 80's and 90's did.  The younger guys would also need a manager.  Matt Stryker could be good in that role.  But also some "alumni" and legends could also be brought in as well.

I'd really like to hear who you'd pair up and why.  Please share your thoughts.
Posted by Kevin Hunsperger at 12:51 AM