Forget the maids a milking on the 8th day of Christmas.  Instead, we've rounded up some wrestling hillbillies.  Eight of them to be exact.

The Hillbilly explosion started in the WWF sometime in late 1984 or maybe early 1985.  I remember watching WWF when it was on the Superstation TBS (remember those days) and Hulk Hogan got in a tight spot with Ken Patera and Big John Studd.  They had recently cut Andre the Giant's hair and as Patera held Hogan in the full nelson, Studd had the scissors in hand and was ready to give him a clippin'.  Keep in mind this was long before "the Barber" Brutus Beefcake was on the scene.

Suddenly, there was a ruckus coming from the front row.  The man who had been sitting there for weeks was coming over the security barrier and into the ring.  He was decked out in overalls and a brown leather hat.  We only knew him as Jim at that point, but once he said Hulk Hogan from the evil villains in the ring, we learned he was Hillbilly Jim and he could also grapple.

At first, Hillbilly Jim hung out with Hogan before bringing in some big guns.  His "Uncle" Elmer would soon arrive and a cousin named Luke.  (That's 3)  Luke wouldn't be around for long.  He'd leave the fed and be replaced by another one of the hillbilly cousins, this time Junior.  Of course, Granny Kim was the matriarch of the group, but I don't remember much of her.  I don't think she was too involved with any of the angles and I don't even remember her at Elmer's wedding on Saturday Night's Main Event.

So if we count Granny Kim (and I'm going to) we're up to five hillbillies.  They stayed around for a bit in the 80's before eventually leaving.  Jim stayed with the WWF and worked behind the scenes.  I actually saw him at the Axxess tent at Wrestlemania 22 in Chicago.  He looked great by the way.

Without a doubt Jim was the most popular of the group.  He had an LJN figure in his likeness (I still have mine) and he was a part of the "Hulk Hogan's Rock n Wrestling" Cartoon.  But I think the gimmick had run its course and Jim had actually been injured at some point.  So it made sense for him to work behind the scenes.

Then Jim came back on camera just about the same time as the Attitude Era, or at least when it was in its infancy.  He managed two other hillbillies.  Henry O. Godwin and his dimwitted brother Phineas I. Godwin. 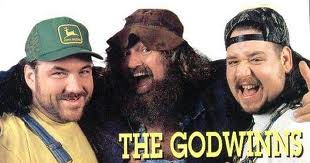 HOG and PIG.  Get it?  They were of course pig farmers and toted a bucket of slop with them to the ring.  When they were faces, they would nail an opponent with the messy mixture much to the delight of squealing fans everywhere.

This was at a time when the WWF was still in that cartoony, PG rated era.  Soon, when they decided to go a little more rouge with their programming, the silly hillbillies ditched Jim and brought in Uncle Cletus as their manager.  The duo was portrayed as a couple of inbred slackjaws like a scene from Deliverance, before they ended up as a couple of tough thugs named Southern Justice.  Hence came an end to their Hillbilly ways.
﻿﻿
﻿﻿
Another Hillbilly as we count down to our 8, is Solomon Grundy.  He wasn't around very long, and only made a mild impact on the world of wrestling.  Grundy wrestled in World Class Championship Wrestling. I seem to think he was also a part of Global wrestling too, but I'm not 100% sure on that.  The big man was a lovable character who wrestled with no shoes.  This was just as the Hillbilly craze was coming to an end in the WWF, so I'm not sure if Fritz Von Erich was trying to cash in on the excitement too or not.

﻿ ﻿ Perhaps the granddaddy of the whole hillbilly movement was Haystacks Calhoun.

He wore the typical hillbilly gear, including the overalls, white shirt, and a horseshoe around his neck.  It's something Hillbilly Jim also adopted when he debuted many decades later.

Calhoun was a big man, weighing in at one point around 800 pounds.  He wrestled all over, including the WWWF and the tag team titles with Tony Garea.  Haystacks would be the role model for all the bumpkins who would follow in his footsteps.

So there you have a quick history lesson on the 8 hillbillys a milkin' on this 8th day of Christmas.
Posted by Kevin Hunsperger at 8:36 AM