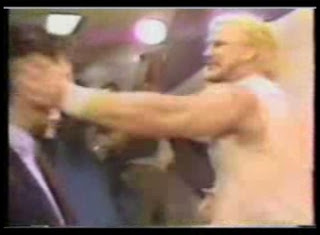 We're turning the hands of time way back for this week's flashback.  It was December 28, 1984.  The WWF, NWA, and AWA were the big three in terms of wrestling companies.  Hulkamania was running wild.  We were months away from the first ever Wrestlemania.  And ABC News wanted to cash in on the popularity of the "sport."

20/20 correspondent John Stossel was doing a report on wrestling.  More of an expose piece.  I was 11 years old at this time, and until then I believed that wrestling was legit.  I knew there was probably some "acting" involved but the things Stossel's report uncovered were unbelievable to me.

You can watch the report on YouTube.  This is part two of the story.  It's also were things get interesting.  John interviews Vince McMahon about the company and if he has a monopoly.  He asks point blank if it's a legit sport and Vince gives a pretty good answer.  Remember this was just in the infancy of the WWF and Vince was still kinda green in terms of his media relations.  In fact, the term "sports entertainment" wasn't mentioned at all.  Maybe it was this report that helped to coin that phrase.

The end of the video is were you'll find the good stuff.  The whole reason for this post.  You see, Stossel decided to ask superstar Dr. D David Schultz if wrestling is fake.  Afterall, Schultz's former tag team partner Eddie Mansfield had just admitted it was.  Even showed the world how to blade.

Well, the Doc didn't take too kindly to the question.  If you're a long time fan, you know what happens.  Stossel took a couple of open handed slaps.  One to each side of the head.  Knocked him on his butt both times.  Schultz asks him if that's fake.  It wasn't.  Stossel sued and the WWF settled out of court and paid the reporter $425,000.

As a reporter, I will say this.  Schultz should have never put his hands on Stossel.  But as a wrestling fan, I would say, why would you ask a 250 pound meat head a question like that?  Prior to the question you could see Dave was aggatated.  I found it interesting that none of the other guys stepped in to stop him either.  I recognized Mr. Fuji.  I'm not sure who else is back there.

Schultz was fired a short time later.  But I've read that came about when he threatened to beat up Mr. T around the time the company was preparing for Wrestlemania.  So Schultz was clearly very protective of the business and didn't appreciate outsiders.  Can't totally fault the guy with that, but obviously Vince was taking his company and the business in a whole different direction back then.

One other thing I noticed in the Stossel report is the whole "violence breeds violence" line.  Fans have gotten disruptive and rowdy and even violent at football games, soccer games, and even concerts.  But that's never portrayed as something bad by the media.

Okay, I'm off my soapbox.

Hope you enjoyed this walk down memory lane.  I can still remember sitting in my parents room on their bed watching the 20/20 report.  In some ways it seems like it was just yesterday.  Man I'm old!

Wow, watching some more Dr. D videos on YouTube.  This is really interesting.  I hadn't seen a whole lot of him before as I was just getting into wrestling around the time he was fired.  Someone commented that Stone Cold ripped his gimmick from Schultz.  There are some similarities there.

Thanks for reading.  Be sure to check out My 1-2-3 Cents on YouTube too!
Posted by Kevin Hunsperger at 9:49 AM