In a recent post I listed a group of superstars I feel should be in the Hall of Fame now.  Many of them I doubt will actually be inducted as a part of the class of 2011.  Part of my reasoning is the fact that Wrestlemania 27 is in Atlanta and many are speculating this ceremony will be  a more WCW driven induction.

So here is a list of WCW (with some WWE experience) hopefuls for the class of 2011.

Spoiler alert:  you won't find Sting on this list.  He is probably the one guy you'd most likely associate with WCW, but since he's still in TNA, I don't think the WWE would induct-yet.

Please not again, most if not all these photos, expect the one above, are from WWE.

1. Lex Luger:  Love him or hate him, Lex Luger was one of the biggest stars in the history of WCW.   He held the world title, U.S. (on several occasions), and the tag team titles.  Early in his career he was pegged as the guy to beat Ric Flair and take the title.  And as many times as he tried, he always seemed to come up short.  It wasn't until Flair left WCW for the WWF, that he finally got the gold belt.

While he may not have been the best champion, Luger was leading the company at a time when they'd lost their biggest star.  That's a tough role to fill.  I don't know if the pressure got to him or Vince made him an offer he couldn't refuse, but he soon left Atlanta for the promised land of the WWF.

There he competed as the Narcissist.  A role that seemed to fit him perfectly.  But then in an attempt to fill the void made by Hulk Hogan's departure, Luger became a babyface patriot, and seemed to be the man who would defeat the giant Yokozuna for the world title.  His attempts failed again, and it seemed that Luger was expected to be someone he wasn't.  He floundered and finally went back to WCW.

He wore the world title again and feuded with the nWo.  In more recent years, Lex has been in poor health after suffering from a stroke.  He's had his share of legal problems too, but that all appears to be behind him now.  Luger is a born again Christian and has made great strides as he recovers from his near crippling stroke.

﻿
﻿ 2.  Arn Anderson & Tully Blanchard:  These guys could actually go in separately, but they were also on the best teams in WCW in the late 80's.  They were great on their own too.

Tully wore the NWA TV title and U.S. title and had several great matches with the likes of Dusty Rhodes and Magnum T.A.  In fact, thinking back to my childhood and watching the old NWA shows, I think TA may have been his greatest rival.  I remember a classic cage match between the two in which both men were bloodied and battered.

Arn was also a TV champion and dubbed the Enforcer of the Horsemen.  Besides Flair, he was the group's other constant.  Arn had some great individual matches with Dusty too.  He and his "cousin" Ole Anderson were the original team in the horsemen, but when Ole got kicked out, he and Tully started teaming up.  I think that was a good move, as the two had some classic matches against the Rock n Roll Express, Road Warriors, and the Midnight Express.

The pair left the NWA in 1989 for the green pastures of the WWF.  They had some great matches there, most notably against the Rockers and the Hart Foundation.  Dubbed the Brain Busters and managed by Bobby Heenan, the two beat Demolition for the WWF tag team titles.  They eventually lost them back to the faces, and quickly left the WWF.  Arn went back to the NWA, Tully headed for the AWA.  It wasn't long after that he retired from wrestling.

Arn kept wrestling and was a part of the Monday Night Wars and reprised his role in the 4 Horsemen.  The Enforcer is still active with the WWE as a trainer.  It's a role that Tully held briefly a few years ago.  Either way, both of these guys deserve to be in the Hall of Fame. 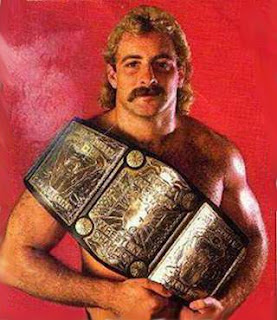 3.  Magnum T.A.:  I often wonder, what if? when it comes to Magnum T.A.  Older fans know what I'm talking about.  Terry Allen was at the top of his game back in 1986 when he was nearly killed in a car accident.  The wreck left him unable to walk, much less wrestle.  Through rehab and hard work, he did walk again, but with assistance of a cane.

In the mid 80's T.A. was one of the most sound wrestlers in the business.  He gave Ric Flair a run for his money and many thought he'd be the World champion one day.  He had already been the U.S. and TV champions, feuding with Nikita Koloff and Tully Blanchard.

Besides the great matches with those two and Flair, another memory of TA I have is from the Great American Bash (I think) and he was wrestling Kamala.  The Ugandan Giant was on the attack, but was subdued by the champ's patented belly to belly suplex.  I was amazed a guy of Magnum's size could do that to such a big man.

My first memories of "Beautiful" Bobby Eaton and "Loverboy" Dennis Condrey were in World Class.  They teamed up with their obnoxious, tennis racket wielding manager Jim Cornette.  They embroiled in a feud with the Fantastics and had some stellar matches in the territory over the tag team titles.

It wasn't long before they jumped to the NWA and had a natural rivalry with the Rock n Roll Express.  The duo also went head to head with two of the toughest guys on the block, the Road Warriors.  They engaged in that memorable scaffold match at Starrcade.  Who's idea was it to put a scaffold over the ring anyway?

Eventually the Loverboy would be replaced with a younger, more athletic "Sweet" Stan Lane.  While I think Condrey and Eaton worked well together, I think Lane and Eaton were the better version of the ME.  They would eventually turn face and win the tag team titles from Arn and Tully.  A heel version of the Road Warriors would then claim the belts.

What can I say about Cornette.  He's one of the best managers in the history of the business.  A classic heel who lead the way for many men in the business, including Big Bubba Rogers, Yokozuna, Owen Hart, and the British Bulldog among others.  Let's not hold The New Midnight Express against him though.

Cornette's not on the best of terms with the WWE right now, so I don't know how likely it would be for him to get in, but at some point he and his team deserve a spot in the hall.

5.  The Great Muta: Muta made a big impact on the NWA back in the late 80's.  I remember him getting involved in the Ric Flair-Terry Funk feud.  Besides sparking a rivalry with Flair, he also battled Sting and beat him for the TV Title.

Muta was a great addition to the roster back then, as he did moves that a lot of American fans weren't exposed to before.   I can't really explain it, but he raised the bar for wrestling here in the United States.   He continued to wrestle in Japan and the NWA/WCW for years.

6.  Barry Windham:  Barry Windham jumped between NWA/WCW and the WWF several times in his career, but I think it's safe to say his most success was in the NWA.  I mean come on, two of his three stints in the WWF he was saddled with the silly name "Widowmaker" and "The Stalker".  And don't forget about "Blackjack" Windham (that came after the Stalker gimmick fell flat)

Anyway, Barry Windham gave Flair a run for his money back in the mid to late 80's.  Many thought he might even win the world title (myself included)  And while he never got that strap, Windham was quite successful.

He won several of the secondary titles and did have a run as NWA "world" champion.  He beat Muta for that title.  But I never really viewed that title as the world title.  At that time, there was the WCW world champion, so I never understood how you could have two world champions in the same company and on the same show.  It's not quite the same as the whole Raw and Smackdown world champions we have today.  But I digress...

Windham's impact on wrestling was quite significant and he did have success in the WWF too as a world tag team champion with Mike Rotunda.

7.  Ron Simmons: A fan just tuning in to wrestling today, would only know Ron Simmons as the guy who comes out and shouts "DAMN!" when something bizarre is happening on screen.

But Ron Simmons was quite the star back in the day.  Even before heading to the WWF and getting that crappy Faarooq Asad gimmick, (remember that hideous gear he wore?) Simmons was an established star.

After a successful run as a college football standout and some time in the pro's, Simmons turned to professional wrestling.   He spent the early days of his career in the NWA/WCW, where he won the tag team titles with Butch Reed as a part of Doom.  He also wore the U.S. tag titles with Big Josh (who became Doink the Clown).

But Simmon's biggest accomplishment was winning the world heavyweight championship.   He was the first African American to hold that title.  His reign didn't stand out as he was booked in some crappy matches with the likes of the Barbarian (a world title contender, really?) He lost the title back to Vader about five months after winning it.

But I'd say he made an impact on wrestling history with his work in WCW and in the WWF, and should at some point be inducted into the HOF.

Obviously, this is a short list there are plenty of others who wrestled in WCW who are worthy of induction.  Some that I left off but should be considered include Vader (who I think will go in at some point), Nikita Koloff, and his "uncle" Ivan (who is a former WWWF champion).  The Rock n Roll Express, Goldberg, and J.J. Dillon will all someday be considered for induction some day too.

So if you had to cast a WCW Hall of Fame, who would you chose?
Posted by Kevin Hunsperger at 5:57 PM