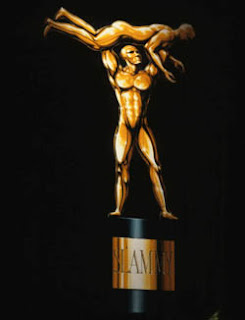 Another year has come and gone and another Slammy awards ceremony is in the books.

Let me start off by saying when I saw David Arquette come out and started talking, I was ready to change the channel.  There is something so irritating about this man.  But I know he is a good guy because he donated the money he earned during his WCW stint to charity.  But wow, his voice last night sounded hoarse and he was hard to understand.

I think the E should have gone with former MC Todd Pettengill.  Do you remember this?  IMO, it was AWESOME!  It's creative stuff like this that the E seems to be missing out on.

The show last night was okay.  I talk via the internet with a couple of wrestling buddies, Chad and Travis a couple of times a week.  Here are some thoughts from my friend Chad.


About the only good thing about the Slammy Awards was the return of former champ David Arquette and an appearance by Angry Miz Girl. Other than that, another plodding episode with the big angle seemingly written by people who think the next show is the potential last show so need to wrap things up nicely so there are no cliffhangers.

I'm not sure, but I think he's being sarcastic about Arquette. You already read my thoughts on him. I thought the Angry Miz Girl segment could have been better. Maybe have Miz destroy the Slammy. Yeah, I like picking on kids.


Seriously, Cena is rehired before the next PPV? And he was on every show since the last PPV so what was the point of him being fired? At this point I would have been happy with him not appearing for two months and then have Juan Cena enter the Rumble. Whoever is the head writer for this angle should be replaced ASAP.

I couldn't agree more. Lots of missed opportunities with this angle. Was this the plan all along? Or did someone just drop the ball.

Liked how they threw matches together quickly to fill out a PPV that is 6 days away. I don't know what's worse, last year's TLC PPV that had one Tables match, one Chairs match and one Ladder match and several regular matches, or this year's TLC show which appears to have nothing but gimmick matches.

Guessing Morrison will beat Sheamus and get the token no chance title shot at the Rumble. At least they'll have history to play off of is Miz is still champ.

This is a good point. The Royal Rumble typically features a title match that the contender doesn't stand a chance. Remember Hardcore Holly a few years back? And Test for the ECW title. I'm by no means putting Morrison in the same class as those two. I actually think it will be a good match if it actually happens.

A Diva's table match? really? why?

More of my own thoughts, I'm glad the Miz actually pinned Rey, but I was hoping he would get a clean pin.

Cena winning SOTY was weak and lame. But not a surprise.

Michael Cole still annoys me. Not like he used to, but he's still irritating. That's the point, I know.

Will we ever see Michael Tarver or Darren Young again? I know Skip Sheffield is hurt. But is he still Nexus?

Later this week I'll collect my thoughts on TLC. I know you can't wait.
Posted by Kevin Hunsperger at 3:35 PM