Tables and Ladders and Chairs, Oh No!

In about three weeks, WWE presents TLC: Tables, Ladders, and Chairs.  Not really an event I'm a huge fan of.  Honestly, the "gimmicky" matches are now done so often I think they've lost their appeal.

I actually miss the days of ONE on ONE title defenses.  Just two opponents in the ring.  No triple threat, no fatal four ways, no six pack challenge matches.

I know in today's world, with the amount of talent and potential contenders for the title, they have to cram as many guys onto a pay per view as possible.  But a lot of times, the undercard matches seem like they should just be on Raw or Smackdown.  That's another complaint, there are too many ppv worthy matches being given away on free TV.  Or we get a rematch the next night or week (ie. Sheamus vs. John Morrison)

I guess these days the gimmick matches are a way to attract fans.  With so much programming every week you've got to have something that's eye catching.  That's the only reason I can think of.  Then look at TNA, they seem to go way overboard on the gimmick matches.  Not to mention making them even sillier than what WWE is doing.

Don't get me wrong, I enjoy some of these matches, in particular the Money in the Bank and the Hell in the Cell.  But I think both should have just been left as one match and not turned into pay per view events.  The whole stipulation behind MITB has lost some of its luster when you have 3 guys all win it and cash it in within an eight month time frame.

Same with HITC.  I was in the crowd at the first one in 1997 at the Savvis (Kiel) Center in St. Louis.  It was a pretty ground breaking event.  Then in 1998 when they did it again with Foley and Undertaker.  Wow.  But now they have done so many of them, even the ones on Raw, the awe factor has decreased.

While I'm on this tirade, title matches should not be decided in a table match.  I'm not even sure if I'm crazy about the ladder match or the cage match on this one.  Why not have the best man win by pinning his opponent or making him submit?  Really, I'm not even sure I understand the whole table match concept.  I can see the uselessness of the ladder match.  Keep it as Money in the Bank.  Use it sparingly.

Since the WWE is promoting an anti chair shot to the head policy, I'm not sure why they're even advocating a chair match on the PPV.  Does that make any sense?  I know this is wrestling, and one has to suspend logic most of the time.

Another problem I have with these types of matches, I feel like they put a hell of a lot more wear and tear on the wrestlers' bodies.  This week we saw Jerry Lawler at 62 show us he can still put on a good show.  Flair still gets in there at 63.  But will we see today's superstars able bodied enough to even get to the ring when they're 40?  Time will tell I suppose.   It's a brutal enough business without having to worry about crashing through a table or falling from a ladder or having hundreds of push pins stuck in your hide. 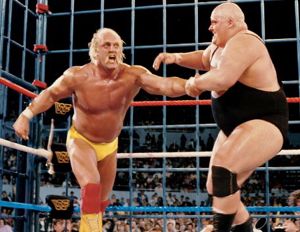 I guess my ranting should end.  Nothing will change in that respect.  The fans want what they want.

I will continue to watch and write about what I see and how I miss the good ol' days with the blue steel cage.  Vintage WWF.
Posted by Kevin Hunsperger at 2:15 PM