Black & white attack: it's the rWo 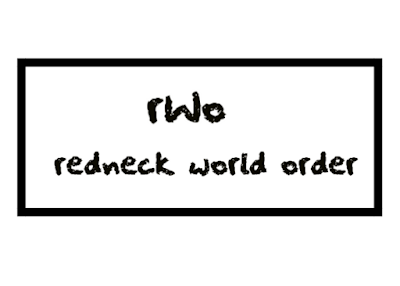 I've talked before here about the Ragin' Redneck. He arrived on the scene in Stride Pro Wrestling in late 2017 before taking on the red and yellow persona of Hulk Hogan. RedneckMania was born and despite his love and admiration for the Hulkster, his win-loss record did not reflect that of his mentor's.

That's when a change occurred. RedneckMania was a special guest referee for a tag team match between the DR Party and Josh Plumlee and Tony Wilson. During the course of the match he turned on the good guys and attempted to help the DR Party win. Those efforts didn't work and the educators ended up winning. 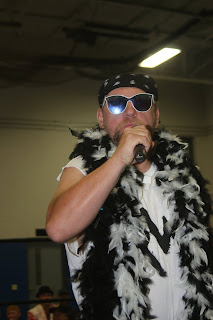 When RedneckMania returned to Stride in August, gone was the red and yellow. Instead the black and white were on display and a few henchmen were in tow. Hollywood Redneck snatched the mic and announced the Redneck World Order was taking over Stride.

"The Bad Guy" Cole James and Hollywood will join forces and challenge for the Stride Pro Wrestling tag team titles. The Midwest Monster Hunters are the current champs. Former champs the DR Party will also be involved. Three of the most hated factions in the company will collide. It'll be interesting to see who comes out on top of this three-way championship match.

Posted by Kevin Hunsperger at 7:24 AM