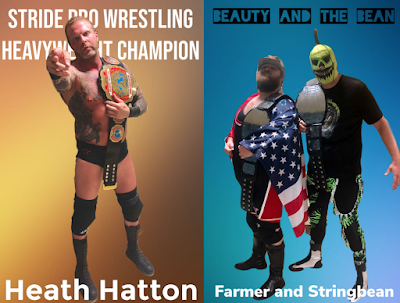 Wow, I picked the wrong Stride Pro Wrestling show to miss. There were three title defenses Friday night and two-thirds of them resulted in new champions. It may be the first day of fall, but things are certainly heating up for the company.


First, Heath Hatton has regained the Stride Pro Wrestling Heavyweight Title. He beat Tony Flood for the belt with Jerry Travelstead as the special guest referee. Hatton first won the Stride Championship in November 2016, beating his former tag team partner Ax Allwardt. He held the gold until Roger Matheus won Stride's first ever TLC match. You can see the history of the championship below.

Hatton and Flood have a storied history. Just a year ago they exchanged the Legacy Title twice over the course of eight days. Flood will no doubt want a rematch. However, it seems he has taken issue with T-Dog once again as well. It'll be interesting to see how this plays out. Stay tuned as Stride heads to T-Dog's home turf of Pinckneyville on Oct. 6.

The brand new team of "Farmer" Billy Hills and Stringbean are the Stride Pro Wrestling Tag Team Champions. 'Beauty and the Bean' as some are calling them formed for the very first time Friday night. The duo outlasted three other teams, including the defending champions, the rWo (Redneck World Order), The DR Party and K2 Brothers in an elimination style match. The DR Party first eliminated the Kellis Brothers. Farmer and Bean beat the rWo and then the DR Party after a miscommunication between Dexter Roswell and Scott Phoenix. That lead to their breakup.

The new champs will have a list of contenders looking for a shot. Between the abovementioned teams (except Roswell & Phoenix) and others like the Midwest Monster Hunters and new variations of the DR Party; Farmer and Bean will have a full plate of defenses. I'm looking forward to the upcoming months. It's always a great time to be a fan of Stride Pro Wrestling, but right now things are getting intense.

Posted by Kevin Hunsperger at 11:20 AM