J. Wellington Beauregard steps back into the ring

I've known J. Wellington Beauregard for a number of years. We first met in 2012 when he bought the contract of Ax Allwardt from Gaylord Stephens in All American Pro Wrestling. Then when Stride Pro Wrestling came to be some four years later, J. Wells lead Ax to championship glory as the very first Stride Heavyweight Champion.

Over the course of 18 months, a divide came between the duo. Despite managing Ax and Scott Phoenix to the Stride Tag Team Championships, his focus turned to the DR Party. That resulted in the 2017 screw job where Phoenix and J. Wells helped the DR Party win the gold. Since that time, Ax has made it his mission to destroy his former manager.

There's been a constant back and forth between the two, including J. Wells and his assistant Mr. Anthony costing Ax and Heath Hatton the tag team titles for the second time. There was some revenge gained when the manager had to appear in a battle royal later that night. Again, thanks to Mr. Anthony, Ax was distracted and J. Wells was able to eliminate his former charge. Hatton ended up being the last man standing and the new number one contender to the heavyweight title.

However, this Saturday night, Ax and Hatton will each get another shot at revenge. Stride general manager Sam Hunter has announced the former tag champs will face J. Wells and his partner Tony Flood in the main event of the Carterville Free Fair Faceoff. This will be interesting because in the battle royal there were others to protect Beauregard. Flood is the champ, but he's just one man. Ax and Heath have been chomping at the bit to get revenge so I predict Mr. Beauregard will be sporting a neck brace, much like his new assistant does. 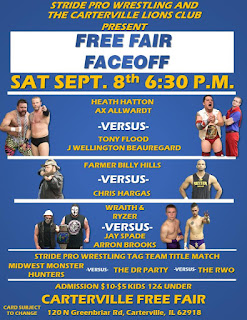 Come out for a great night of action. It's a fundraiser for the Carterville Lions Club. Remember, bell time is 6:30 p.m. at the Carterville Community Center. Tickets are $10 for adults and $5 for kids. We'll see you there.

Posted by Kevin Hunsperger at 1:34 PM