The Undead Outlaw goes beyond the grave 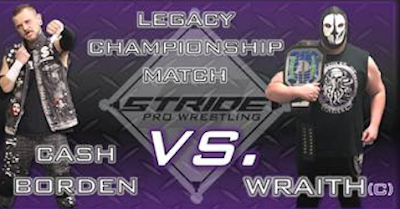 Despite being knocked off track recently by Roger Matheus, Cash Borden is looking to make a comeback of sorts. I talked in a recent post about Borden string of losses, mostly to Matheus and the feud that boiled over between the two. I've said it before and I'll say it again, there are few people as tough as Borden. I borrow the line from JR all the time, simply put, he's tougher than a two dollar steak.

That's why I like his chances this Friday night as he challenges Wraith for the Legacy Title. Despite being nearly unstoppable since his debut in January and his winning of the Legacy belt and Stride Cup tournament in March, Wraith does seem to have a weakness. Maybe not a weakness, but a definite vulnerability. That is he needs someone to have his back when he heads into battle. Over the last few months, we've seen that man be Ryzer. The disciple like figure to Wraith has helped the champion retain his title against the likes of Farmer Billy Hills and Arron Brooks.

That relationship is something Cash will have to be aware of. I have no doubt he's done his homework and will be ready for whatever the duo from 'beyond the grave' will throw at him. After all, you don't become the Undead Outlaw by being a slacker. This will be an amazing contest and I suspect we'll see both Cash and Wraith be highly competitive against each other. Even though he doesn't talk, Wraith values that Legacy belt. He also seems to appreciate the relationship with Ryzer and vice versa. 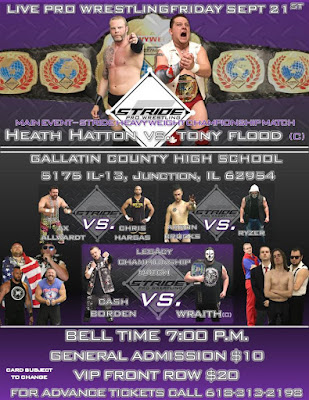 Posted by Kevin Hunsperger at 3:04 PM