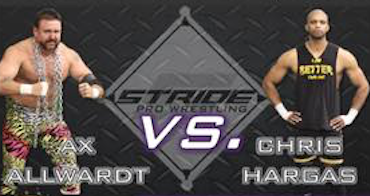 In recent weeks, Stride Pro Wrestling fans have seen subtle changes in Chris Hargas' attitude. He's always been a tough, dominant and confident competitor in the ring. But he's also played by the rules. Hargas had classic battles with the likes of Roger Matheus, Tony Flood and the late, great Red Daniels.

But a recent six-man tag team match saw Hargas argue with one of his partners, Farmer Billy Hills pretty intensely. This lead to a match the next month between the two. Hargas started off sincere and fans thought they'd see a competitive match between friends. Instead, Hargas broke the rules and ended up getting disqualified.

What was even more shocking though was what Hargas did at the end of the night. During the main event, Hargas emerged and clobbered Ax Allwardt with his own chain. That move resulted in a victory for manager J. Wellington Beauregard and Tony Flood. Now a match has been set between Ax and Hargas. The two will meet in Gallatin County this Friday night.

This will be a battle between two seasoned veterans. I reached out to Hargas for an explanation for his actions. My request for answers was ignored. Here's what I do know, Beauregard once managed once managed Ax Allwardt. He's been hellbent on destroying his former protege for nearly a year. Could Hargas be the hired gun that does the trick? Don't count on it. Ax is tougher than a two dollar steak and will not go down with a fight.

Posted by Kevin Hunsperger at 6:55 AM