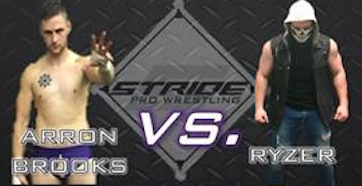 Yeah, I know the title is a bit lame, but it's to illustrate a point. Since Arron Brooks became the number one contender to the Stride Pro Wrestling Legacy Title in May, champion Wraith and his main man Ryzer have done everything possible to make Brooks' life a nightmare. I'd go so far as to say Ryzer has done most of the heavy lifting here, which is understandable since for some reason he's under the control of Wraith.

Brooks has been beaten up and attacked by Ryzer a couple of times, including taking a shot to the head from Ryzer with the Legacy Title. This lead to Wraith successfully defending the belt. Most recently, Wraith and Ryzer joined forces in tag team competition. Again, the duo from beyond the grave overcame Spade and Brooks.

Now, this Friday night (Sept. 21) Brooks gets his hands one on one against Ryzer. I know there's a lot of pent-up rage and anger that will come Ryzer's way. Brooks will likely deploy a ground assault with a flurry of kicks before heading to the top rope. However, Ryzer is no slouch. His first year in Stride has been impressive so far. Simply put, he won't take any abuse from Brooks without returning it in extreme amounts. The two have met in singles competition before so this rematch will be an interesting one to watch. 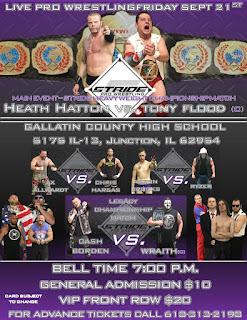 Wraith could, of course, be a factor in this match. Will he return the favors he owes his charge? Or will he be too busy worrying about Cash Borden who gets a title shot Friday night too? My advice to Brooks, have an ally nearby. You never know what tactics a desperate man or spirit will use to win. Be there Friday night at Gallatin County High School for all the action.

Posted by Kevin Hunsperger at 11:56 AM