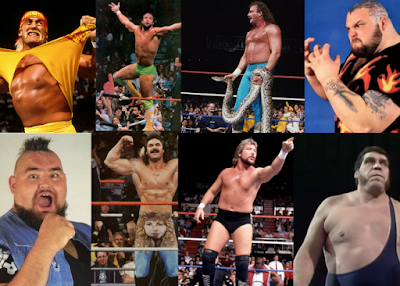 By Kevin Hunsperger
@kevinhunsperger & @my123cents on Twitter
Listen to the podcast
Follow my blog with Bloglovin
Thirty years ago, Hulk Hogan lost the WWF Championship in controversial fashion to Andre the Giant. The Giant surrendered the title to "The Million Dollar Man" Ted DiBiase, who was then stripped of the belt by WWF President Jack Tunney. That, of course, led to the championship tournament at WrestleMania IV and the crowning of "Macho Man" Randy Savage as "the man" in WWF.

I'm not suggesting changing the ending of the tournament or the title run for Savage by any means. In my 1-2-3 cents, the buildup and implosion of the Mega Powers are one of the greatest storylines in the history of professional wrestling. Instead of 14 men in that tournament though, how about just eight competitors?

Tournaments involving more than eight Superstars are usually too many. While I love guys like Ricky "The Dragon" Steamboat, "Hacksaw" Jim Duggan and Don Muraco, I knew none of them stood a chance in this tournament. A year earlier, I would have believed in Steamboat, but I digress. So here's how I would have done the tournament some 30+ years after the fact.

Opening round: Hogan beats One Man Gang. DiBiase gets a win over Jake, Andre beats Bam Bam, and Savage pins Rude. Then DiBiase beats Hogan by count out and Savage wins against Andre by disqualification. This still sets up the finals for DiBiase and Savage, with Savage winning the gold and the celebration goes on as it originally did.

A smaller tournament would have allowed for longer matches. The 14 man concept meant quick matches. The remaining six men, Muraco, Steamboat, Duggan, Greg Valentine, Butch Reed and Dino Bravo could have been injected into the battle royal. Again, I'm not minimizing their contributions, but in hindsight, it was clear none of these Superstars was going to win the gold.

This scenario would have also given us Savage and Rude on pay per view. I don't recall these two ever wrestling in WWE nor WCW. Plus Roberts and DiBiase would have torn it up in the opening round. So much potential there, but of course I'm biased since it's my idea.

Posted by Kevin Hunsperger at 8:36 AM