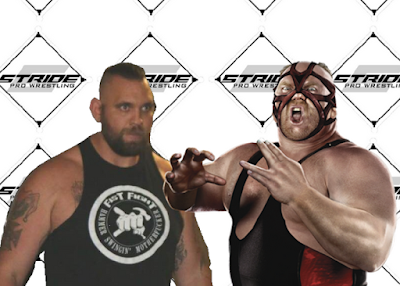 About a week ago, the wrestling world lost the legendary Big Van Vader. In his prime (WCW years) he was a monster heel that rolled through the competition, winning the World Championship three times. By the time he arrived in WWF, the company pulled back the reigns it would seem. Although he had some amazing matches with the Undertaker, Shawn Michaels and Goldust.


There are plenty of guys on WWE's current roster I'd love to have seen Vader go one on one against, including Braun Strowman, Brock Lesnar and Samoa Joe. However, I'm dedicating this blog to the memory of Vader and some of the awesome talents on the Stride Pro Wrestling roster.

Roger Matheus is probably the most Vader-like competitor on the current Stride roster. The former champion is nearly 300 pounds of striking force and intimidation. No doubt he'd go toe to toe with the former WCW Champion and would hang with him throughout the brawl.

Matheus not only has pro wrestling experience but also excelled in the United States Army and the world of Mixed Martial Arts. This would create a formidable trio against Vader. For those who attended Stride Goes Steel, imagine Matheus' entrance and Vader's old entrance with the smoking helmet. That visual alone would be worth the price of admission.

Matheus has dominated the Stride roster for more than two years. I will give credit where it's due. It took three of us and a taser to beat him at Stride Goes Steel. A kick in the dick and a fast count by me cost him a match against Cash Borden. And he lost the title only because he didn't answer the 10 count in a last man standing match. To my recollection, Chris Hargas is the only Stride wrestler to pin Matheus cleanly.

Stride fans, who else on the roster would give Vader a great match? Weigh in here or on the My 1-2-3 Cents Facebook page.

Posted by Kevin Hunsperger at 1:16 PM