Instead of Slaughter, how about Jake

In the summer of 1990, it appeared a war between the United States and Iraq was imminent. Around this same time Sgt. Slaughter was finishing up with the AWA and heading back to the World Wrestling Federation. A handful of years before that, Slaughter was arguably the company's second top good guy, right behind Hulk Hogan. But the return of Slaughter saw a change in character. The American hero was sympathizing with Iraq and its leader Saddam Hussein. He even hired a manager who looked just like the dictator.

This lead to Slaughter capturing the WWF Championship from the Ultimate Warrior around the same time tensions had boiled over in the Middle East. America needed a new hero and the Hulkster himself was anointed. That's how it happened. And I'm not knocking Sarge by any means. But by 1991 it seemed his best years had passed him. So instead of Slaughter, how about Jake "the Snake" Roberts.

Sure this would have taken the Blindfold match against "The Model" Rick Martel away from us (I really did enjoy that match and angle), but hear me out. Jake ended up turning heel over the summer of 1991. In my scenario, that process just speeds up a bit. "Macho King" Randy Savage would still play a factor in the Warrior-Roberts match at the Rumble, setting up the retirement match at WrestleMania VII (still my favorite WM match). 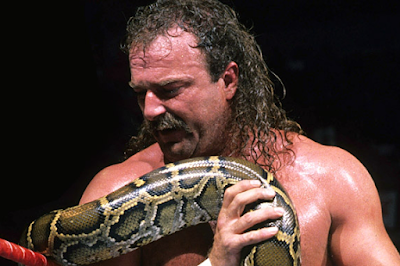 After Survivor Series 1990 there is a battle royal on Superstars of Wrestling to determine who will face the Ultimate Warrior at the Royal Rumble. Jake wins by eliminating Martel and putting an end to their feud. Jake focuses his efforts over the next few weeks on preparing for the championship match and convincing Warrior they're still friends and may the best man win. But unbeknownst to the rest of us, Jake has made an alliance with Savage who runs interference in the match just like he did in the real scenario. Then we learn to 'never trust a snake.' 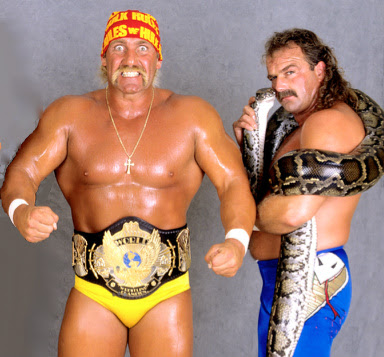 Hogan, disgusted by Roberts actions, confronts the Snake on the Brother Love Show. This leads to a sneak attack from Savage, setting up a vulnerable Hogan to be DDT'd on the red-carpeted floor of the Brother Love Show. Hogan wins at WrestleMania VII and feuds with Roberts through the summer. Snake aligns himself with the Undertaker. SummerSlam's main event becomes Hogan-Warrior vs. Roberts-'Taker. The two heels are frustrated with their loss that night and take it out on Savage and Elizabeth during the wedding reception, taking us to that memorable feud.

Let me know what you think of this and other 'Instead of' blogs listed below.

Posted by Kevin Hunsperger at 12:50 PM