Matheus and his new title

Cape Championship Wrestling returns to the AC Brase Arena tonight (Saturday, June 30). Bell time for the show is 7 p.m. and there are lots of great matches on the card. I really wish I could be there, especially to see the triple threat match for the CCW Championship as Austin Lane defends against both Marko Stunt and Jacksyn Crowley.

The men and women in this company will hit the ring hard and do a great job. One other match I am particularly interested in is Matheus (known as Roger Matheus over here in Stride Pro Wrestling) taking on Joey O'Riley, another alumnus of Stride. I don't believe these two have ever crossed paths before, so it should be a great match, the classic David v. Goliath scenario. 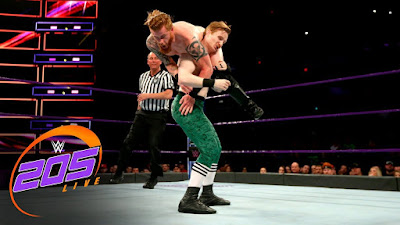 But don't overlook O'Riley. He's had an amazing streak going recently. Just a couple of months ago he wrestled on WWE's 205 Live. He's also picked up some key wins and has had a championship run in other indy companies. Joey is on the rise and a hot commodity in the wrestling world right now.

As JR would say, Matheus is tougher than a two dollar steak. He's ground assault along with an MMA background and an 'I don't give an eff' mentality makes him a dangerous competitor. If he pounces first and uses his size and strength on Joey, it could be a short night. 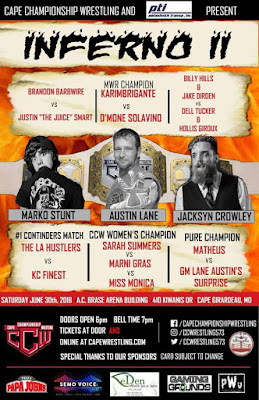 Matheus is also going into this match (which was announced recently by CCW GM Lane Austin) defending his Pure Openweight World Championship. I know virtually nothing about this title, but it's my understanding Matheus created it out of frustration over not being able to capture CCW's heavyweight title.

It's going to be a great night in Cape. I always leave entertained and satisfied, knowing I've gotten my money's worth.

Posted by Kevin Hunsperger at 9:43 AM