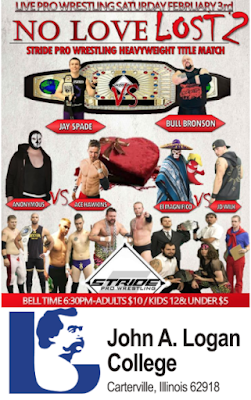 Once again Stride Pro Wrestling finds itself in a new venue. Long story short, our usual home at the Illinois Star Centre Mall has been having issues. The mall itself does not have functioning restrooms and they will not allow us to bring in more than 100 fans. The anchor stores like Dillards and Target have working facilities, but that's not enough for us.

This happened earlier this month and we scrambled. Sadly it has happened again this month, but we had a few more days notice than in January. So No Love Lost 2 will be held in the small gym at John A. Logan College in Carterville. Bell time is still 6:30 p.m. Doors will open at 6.

I want to personally thank JALC Basketball coach Kyle Smithpeters and Dean of Community Education Barry Hancock for making this possible. The show must go on and it will thanks to the folks at Logan.