There is no shortage of wrestling action on this Royal Rumble weekend. Whether you're into WWE or the independent scene, there are several shows happening. Since I'm in southern Illinois, I'll stick to the local shows first. 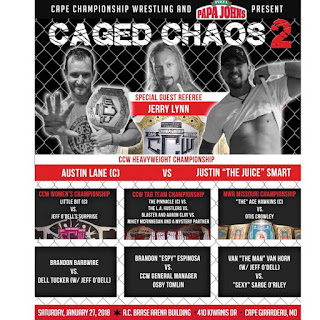 Saturday night Cape Championship Wrestling in Cape Girardeau, Missouri presents Cages Chaos 2. Each match on the show will be contested inside a steel cage. The main event features CCW Champion "Best of the Best" Austin Lane defending against Justin "The Juice" Smart. The man who trained Lane, Jerry Lynn, will be the special guest referee for the match. Several Stride Pro Wrestling guys will also be on the show tonight, including Roger Matheus, Ace Hawkins and Brandon Espinosa. You can see the full card here. 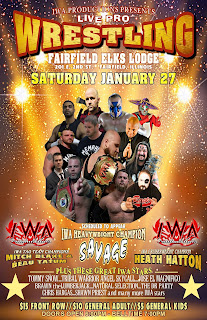 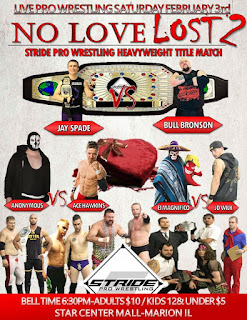 Stride Pro Wrestling returns to action a week from tonight. On Saturday, Feb. 3 Jay Spade will defend the Stride Pro Wrestling Heavyweight Title against Bull Bronson. The Stride Cup Tournament continues and Hatton will be the guest on 'Striking Your Fancy' with J. Wellington Beauregard. No Love Lost 2 will begin at 6:30 p.m. at the Illinois Star Centre Mall in Marion.

If you follow the My 1-2-3 Cents Facebook page you've seen that Chad is in Philly this weekend for the Royal Rumble. He attended the House of Hardcore 37 show at the ECW Arena Friday night. Earlier today he met the Four Horsemen and he's headed to Sunday's Chikara show and the Rumble Sunday night. We'll talk more about his experiences there in Monday's My 1-2-3 Cents podcast.

Watch the video below to learn how you can win a Shockmaster Elite action figure.