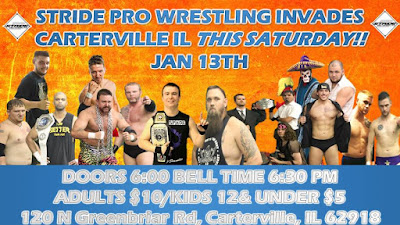 Thursday afternoon the Stride Pro Wrestling front office received word that the usual venue for shows, the Illinois Star Centre Mall, would not be available for this weekend's event. The mall has served as Stride's home base since the company's inception in March 2016. For those who live in southern Illinois or who have ever been to the mall in Marion knows the building is a shell of its former self. Most recently there have been heating, water and other safety issues crop up, hence the need to find a new venue for wrestling.


Within 90 minutes of the news, we were able to find a new place for tonight's (Saturday) show. The opening round of the Stride Cup Tournament will now be held at the Carterville Community Center. It's located at 120 N. Greenbriar Road in Carterville. If you're familiar with Cannon Park, it's the building at the park's entrance. Click here for the map. Thanks to Khrissy Hollister and Mayor Brad Robinson for working with us to make it happen.

It'll be an interesting set up as pro wrestling has never been done there. However, I'm excited about the new place and look forward to seeing how fans receive it. Tonight's settings may be different, but the same great wrestling action will be there. The Stride Pro Wrestling heavyweight champion Jay Spade will defend against Roger Matheus, the Legacy Title is on the line as Chris Hargas defends against Tony Flood and Joey O'Riley and Arron Brooks get a shot at the tag team champions, the DR Party. Heath Hatton, Ax Allwardt, JD Wilk, El Magnifico and all your other favorites are scheduled to be there too! And don't forget referee Lane Austin and GM Sam Hunter.

Bell time is still 6:30 p.m. The doors will open at 6. Please be patient as we will be working hard to get the area set up for the show. Share this with your wrestling fan friends so they know our venue is different.

Posted by Kevin Hunsperger at 11:13 AM