Ricocheting from the indies to WWE

Earlier this week WWE announced indy star Ricochet has signed a deal to start work at the Performance Center in Orlando. He'll be a part of the NXT brand as he continues to develop and hone his craft. It'll be a nice boost into the NXT system with fresh faces coming in. Additionally, it's been reported the tag team War Machine and women's star Candice LeRae are also NXT-bound.

Ricochet, whose real name is Trevor Mann, is actually not far from where I live now. For those who know, I'm a morning news anchor in southern Illinois. Mann grew up in Paducah, Kentucky which is about 45 minutes away. So after learning of his signing, I ran a story on the news about "local wrestler headed to WWE." It's a great excuse to get some wrestling stories on the newscast.

I've had a chance to watch Ricochet wrestle in person a couple of times. The stand out occasion for me was when he faced Austin Lane in the main event of a Cape Championship Wrestling show in August 2016. You can see a portion of that match here (I can't figure out how to post an Instagram video on this blog.)The two put on a clinic in the ring which exceeded my expectations. Not only was I impressed with the guest star on the show, but Lane also.

Ricochet's signing is welcomed by me and in my 1-2-3 cents, he could also help breath some new life into the Cruiserweight division. I don't know what the future holds for Neville (I'm still hoping he returns) but the man formerly known as Prince Puma would certainly add some sizzle to 205 Live. I can't imagine he'll be on NXT long, but even if he is, it'll be a benefit for both sides. 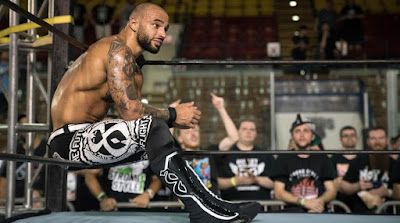 Even though I don't know him personally, I'm excited someone from my neck of the woods is getting a break in the largest wrestling (sports entertainment) company in the world. Ricochet's signing should be enough to encourage men and women toiling in the independents to keep pushing. Also, youngsters should see this as a reminder to NEVER give up on their dreams. Heck, it's something even us old timers could use too.

Posted by Kevin Hunsperger at 3:34 PM