When I started Fun Fact Friday, it was to help promote independent wrestlers around the region. Most of the subjects have been from Stride Pro Wrestling or Cape Championship Wrestling. This week, I'm heading north of the area, but still in southern Illinois with IWA Productions. They have a show coming up Saturday night (Jan. 27) at the Fairfield, Illinois Elks Lodge. Stride competitors like Heath Hatton, Jose Magnifico and Dexter Roswell will be part of the show, as well as one-half of the tag team champions in IWA Productions; Mitch Blake. Here are a few things to know about him.

1. When he hits an opponent it's a MITCH SLAP. It's not a chop and he really puts everything into it and makes sure his foe is in pain when it's all said and done.

2. Check out the video above to hear Mitch talk. He says that is his real voice and not a "wrestler voice."

3. Mitch loves the wrestling business. It's been a passion of his and the reason he wakes up each morning for the last 25 years. That's when he started training. 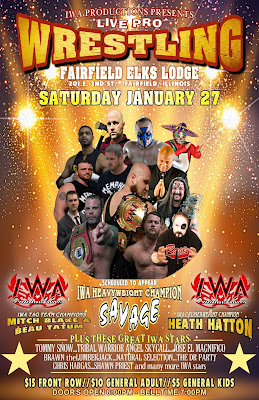 Mitch and his tag team partner Beau Tatum will defend the gold tomorrow night. The show begins at 7 p.m. at the Fairfield Elks Lodge.

Posted by Kevin Hunsperger at 11:28 AM