Several years ago I had the pleasure of meeting Ace Hawkins. He was a part of All American Pro Wrestling and eventually Pro Wrestling Collision. He and Brandon Espinso were a successful tag team, winning the championships in both companies. Despite having known him for years, I don't feel like I "know" Ace. So I asked him to participate in this week's Fun Fact Friday.


1. Ace is an avid Marvel comics fan. He grew up reading the comic books and watching the cartoons and now he watches the Marvel movies. In his words, he's losing his mind waiting for Infinity War to be released in May. Ace suggests that fandom is what led him into the world of professional wrestling
as it's the closest thing to being a real-life comic book character.

2. Ace wants to write a book one day. He has already written a handful of short stories. This is a hobby that started in childhood when he stumbled upon the idea that WWE was hiring creative writers. It was then that he came up with a backup plan in case wrestling didn't work out. But so far, things are going well for the high flyer. Ace also went to college for creative writing.

3. Looking for a partner for trivia night? Call Ace. He fancies himself a random trivia buff. He knows "stupid" info on everything from history to vocabulary to pop culture. For example, did you know in Ireland they have a festival where they marry a local girl to a goat for three days? His friends call these things #Acefacts 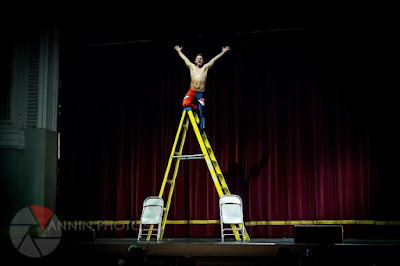 If you want to keep up with Ace on social media, he's everywhere. His Facebook page is here. Look for @Acesaywhat on both Twitter and Instagram too. And look for Ace tomorrow night as he battles Heath Hatton in the Stride Cup Tournament. The venue has changed to the Carterville Community Center (120 N. Greenbriar Road in Carterville). We'll see you there!

Posted by Kevin Hunsperger at 11:03 AM