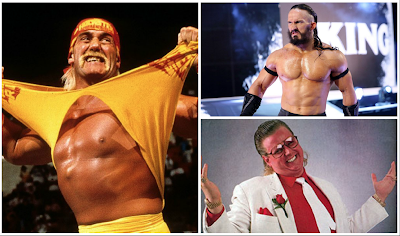 Despite the freezing temperatures, snow and ice, I like the month of January for a number of reasons. It's a fresh start to the year. People seem to put their differences aside for one day in honor of Dr. Martin Luther King. And WWE presents the Royal Rumble and the official countdown to WrestleMania. Since this is a pro wrestling blog, that'll be the topic of discussion and specifically for WWE. There are three things (off the top of my head) that I want to see happen in the world's largest Sports Entertainment company (and in no particular order).


1. Make amends with Hulk Hogan. The former WWE Champion and the biggest star of the 1980s was removed from the company's Hall of Fame section online in 2015. It stems from racist comments the Hulkster made years ago on a private recording. I don't want to turn this into a huge debate, but Hogan has served his time. Firing him and essentially kicking him out of the Hall of Fame were extreme measures.

There had been buzz that perhaps Hogan would return at Raw25 next week and maybe he will. But he has tweeted that he'll be watching the show from home Monday night. It could all be a swerve but in case it's not, Hogan should be a part of WWE in some form. No, I don't want to see him wrestle again, however occasional appearances like other Legends is more than acceptable.

Vince McMahon has a history of letting bygones be bygones when it comes to doing business. Bruno Sammartino, Ultimate Warrior and Kurt Angle are all recent examples of that. And without sounding like a jerk, no one is getting any younger, in this case, so let's move on and bring back the yellow and red.


2. Bring back Neville. Yes, I am a fanboy for Neville. I know he walked out and is likely not coming back. However, I would pop like Orville Redenbacher (yes, my go to) if he came back. He's a great talent and was helping breath some new life in the Cruiserweight Division. And I'd love to see him kick in Enzo's head...


3. Induct Brother Love into the WWE Hall of Fame. Like I mentioned above with the mending fences comment, Bruce Prichard has been invited back after nearly a decade. Brother Love is scheduled to be a part of Raw25. I know I'm jumping the gun, but Brother Love certainly deserves a spot in the HOF. I loved the character from day one and simply enjoy listening to his podcast Something to Wrestle With.

I'm hopeful with the invite there's at least a chance Bruce ends up back in the company. Again, it doesn't have to be a full-time gig, but I would love to see a handful of Brother Love segments in 2018. He still has a great mind for the business too and could be an asset behind the scenes.

These are just a few of the things I'm hoping for this year. What are some things you want to see happen in 2018?


Posted by Kevin Hunsperger at 2:40 PM