Social media has been a powerful tool for years, letting people reconnect all over the world. It's also been a great way to learn more about one of my passions, professional wrestling. It feels like there are more independent companies cropping up, including several within a couple hours of my home in southern Illinois. 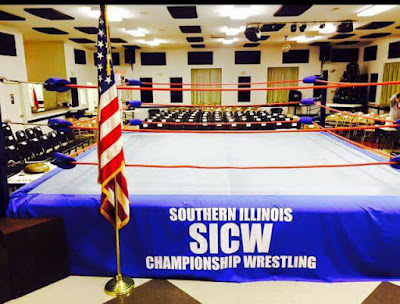 One company I've been able to check out is Southern Illinois Championship Wrestling. Several familiar faces from the Stride Pro Wrestling roster have been on the show, including Heath Hatton, Ax Allwardt and Chris Hargas.

Last year I attended my first show in East Cardonolet. I met the legendary Abdullah the Butcher, long time announcer Larry Matysik and promoter Herb Simmons. He agreed to participate in this week's Fun Fact Friday.

1. Herb has been promoting wrestling for 43 years. SICW has had many greats on the show; including Dory and Terry Funk, Harley Race, Bushwhacker Luke, Ricky "The Dragon" Steamboat, Ted DiBiase, One Man Gang, Koko B. Ware and Hillbilly Jim. He also worked with legends like Bruiser Brody, Dick Murdoch, Crusher Blackwell, Ox Baker, Baron Von Raschke and Gene Kinski.

2. The company has a monthly show called SICW Wrestling Explosion. You can watch it here. It's based on the classic Wrestling at the Chase from St. Louis. (I grew up on that show.) They just aired episode 360. Congrats!

3. Herb's day job is the St. Clair County 9-1-1 director. He's also been the mayor of East Carondelet for 33 years. SICW does several fundraiser shows for the police and fire departments in the community.


Posted by Kevin Hunsperger at 6:27 AM