I've always been a fan of talk show segments on wrestling. Piper's Pit, of course, is the G.O.A.T., followed by The Brother Love Show and The Flower Shop with Adrian Adonis (I liked it, give me a break). In my days with AAPW we did a segment called Old School with Gaylord Stephens and now Stride Pro Wrestling has Striking Your Fancy with J. Wellington Beauregard.

I enjoy these segments with J. Wells. However, his guests so far have all been members of his stable, including Dexter Roswell and Scott Phoenix. But on Saturday night, Heath Hatton will sit down in the ring and join the show. It's an appearance that's been mandated by Stride Pro Wrestling General Manager Sam Hunter. There's been an ongoing rivalry brewing between Hatton and Beauregard since the early days of Stride. Hatton and Ax Allwardt battled over the championship belt for months and J. Wells found himself often getting battered and abused as a result of his interference.

Don't expect Saturday's segment to be cordial. Hatton took a poll earlier in the week and asked fans if he should spear, piledrive, powerbomb or hug and shake hands with Beauregard during the segment. I image everything but handshaking and hugging will be going on. I'm curious what J. Wells will ask the former champ. There's plenty on his mind lately, especially after the beatdown he suffered at the hands of the DR Party last month. 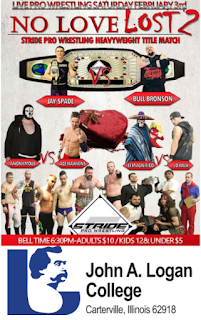 Be sure to join us Saturday night in the multipurpose gym at John A. Logan College in Carterville. Doors open at 6 p.m. and bell time is 6:30 p.m.