Having some fun this Father's Day weekend and looking at some of my favorite wrestling dads.  I think we can all mostly agree, that Vince McMahon is probably the big daddy of them all.  Wouldn't you?  I mean, I don't know where wrestling would be today without the contributions he made in the early 80's and the changes that followed.

Of course a lot of the smaller promotions and regional territories would probably disagree with that.  But let's face it, Vince (and his superstars) took wrestling and made it a house hold world.  A global phenomenon.  He made it somewhat "cool."  Well, okay maybe not cool, but you know what I mean.

Wrestling (now sports entertainment) is in Vince's blood.  He, of course, started off in the early years helping with his father's World Wide Wrestling Federation.  The younger Vince helped put the ring together, ran errands, and did some commentary.  Heck, even after he bought the company from his father in the early 80's and continued doing the commentary on WWF Superstars, I had no idea he actually owned the company.  But remember, I was just a kid.

Vince's dad, Vince Sr. took over the business from his father, Jess McMahon.  Jess was a promoter for years before dying of a cerebral hemorrhage.  That's when Vince, Sr. took over and created the WWWF (courtesy: Wikipedia)

Of course, Vince's children have gotten involved in the family business too.  His son Shane recently left the company to pursue other interests.  But daughter Stephanie and her husband Triple H are on the creative team and run a lot of things back stage.  They have children too, so one would assume they'll be involved at some point too.

Fritz Von Erich:  Remember, this is about MY favorite wrestling families and fathers.  As a kid, the Von Erichs were the ultimate wrestling family.  They were athletic, good looking, and nice guys.  They could do nothing wrong.  They were heroes.  Many of you have read my posts about Kerry Von Erich, one of my all time favorites.  Fritz ran World Class Championship Wrestling and made his sons the top baby faces of the company.  It was a successful formula.  The shows were always exciting as new villains would come in and try to take the "pretty boys" out.

By the time I had started watching, Fritz was retired, but we know how that works in the wrestling business.  He had come out of retirement to team with Mike and Kevin against the Freebirds.  It was on the same card that Kerry beat Ric Flair for the NWA title.  Hard to believe that was 27 years ago.   It's also hard to ignore his contribution to the world of wrestling.  Some many superstars ran through World Class on their way to the top.  The Ultimate Warrior, Rick Rude, and King Kong Bundy all come to mind.

Outside of the ring, Fritz may not have been Ward Cleaver.  But to the fans who adored he and his boys, he could do no wrong.  Rest in peace Fritz, Kerry, David, Mike, and Chris. 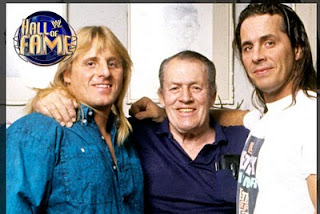 Stu Hart: I never really saw a whole lot of Stu Hart's Stampede Wrestling, but anyone who has ever followed wrestling knows the patriarch of the Hart family had a big impact on the business.  Stu himself was a tough wrestler.  Hearing the stories from other wrestlers about being stretched by the big man has made me wince in pain.  Of course Bret Hart is the most famous of the clan.  He and his brother Owen both became international superstars in the WWF.  Other members of the Hart clan made occasion appearances on WWF shows, even Stu and his wife Helen.

Stu's legacy continues today.  His granddaughter Natalya Neidhart and grandson David Hart Smith are both stars in the WWE.  They are both grossly underused by the company right now, I hope they'll one day get a chance to shine again.  Like the Von Erichs, I was lucky to be in the audience when Stu was inducted into the WWE Hall of Fame.  One of the all time great fathers in the business.

Dusty Rhodes: The American Dream has two sons who have followed in his famous footsteps.  More than 20 years ago Dustin Rhodes stepped into the ring and wrestled along his dad.  Dusty and Dustin teamed up briefly in the WWF to battle Ted DiBiase and Virgil.  The father and son duo would eventually leave the company and go to WCW.  I know for sure they teamed up once against the Nasty Boys, or maybe it was with the Nasty Boys against Col. Parker's stable.  I'm trying to remember the details,  I could look it up, but it's kinda late.  Point is, they too were able to wrestle together.

Fast forward a couple of years and Dustin becomes Goldust and for a time was estranged from Dusty.  The two have obviously reconciled and now Dusty's other son Cody is a rising star in the WWE.  Although it's unlikely we'll see the three of them team up, it would be nice to have one match with the three of them.  I thought when Cody was in Legacy there was going to be some type of program with the dads too.

I've always liked the Dream.  He's entertaining and was always good on the stick.  Goldust was a favorite of mine in the mid 90's.  He certainly stood out in a lackluster era of wrestling in the WWF.  Cody has really grown on me.  I really hope he gets a better push and climbs the ladder to the top.

These are the dads who stick out to me.  There are plenty more, but these are just a few of my favorites.
Who are yours?

Posted by Kevin Hunsperger at 11:25 PM